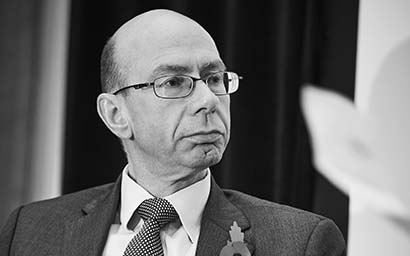 James Walsh of the Pensions and Lifetime Savings Association tells Nick Fitzpatrick how Brexit could influence future UK pensions policy and what the PLSA is doing to increase savings rates.

A phone rings at the Department for Work and Pensions (DWP) in Whitehall and the civil servant who answers it hears that Olly Robbins, the government’s chief Brexit adviser, wants the DWP to brief him on pensions.

Departmental excitement breaks out because the DWP is delighted at the chance to get airtime for pensions in the context of the Brexit negotiations. But how did this come about?

Olly Robbins’ civil servant informs the DWP that it was James Walsh, the policy lead for EU and international at the Pensions and Lifetime Savings Association (PLSA) that paved the way. Walsh had been on the same Eurostar as Robbins – who was permanent secretary at the Department for Exiting the European Union between July 2016 and September 2017. Robbins had let the PLSA man “bend his ear” and was very receptive, Walsh says.

“The DWP said it became legendary because they got a call from Olly’s office asking about what is EIOPA, etc, and it opened the opportunity for the DWP to brief Olly’s team.”

EIOPA is an EU regulatory institution for the pensions and insurance sectors and Walsh is recounting the tale of meeting Robbins in an onstage interview at a DC pensions seminar. I’ve asked Walsh if he thinks the £1 trillion that PLSA-member pension schemes invest in capital markets is a useful bargaining chip for the UK in negotiations with the EU.

“Our members control a trillion of assets and are global investors. Much money from Europe is managed in London and I think the policymakers get that. They’ve heard it not just from us – although we’ve certainly done our lobbying, had meetings with ministers and sent in policy submissions – they’ve heard it also from other bodies around the City…”

Walsh thinks the salience of the pensions industry is understood within negotiations on both sides. “But whether that turns out to be a good Brexit outcome [for the pensions industry], we wait to see,” he says, adding: “Employers would be less able to put contributions into pension schemes if Brexit disrupted the economy.”

Hitting the targets
This would indeed be a fly in the ointment for the UK pensions sector, which has made huge progress since the introduction of auto-enrolment in 2012. Auto-enrolment has been the single most positive development in the industry of recent years.

It brought 10 million more people into workplace pension savings and that, says Walsh, is a “fantastic success story”.

“Over the past 20 years, the number of workers taking part in workplace pension schemes fell and fell until auto-enrolment. It’s been a great example of how to deliver major long-term policy reform successfully and that was done by Adair Turner taking time to build up his evidence and build consensus between unions and employers.” (Turner was chairman of the UK’s Financial Services Authority until it was abolished and in addition, chaired the Pensions Commission.)
Despite the success of auto-enrolment, the level of pension savings remains substandard, however, as reflected in ‘target replacement ratios’ – a person’s pension as a percentage of their pre-retirement salary.

“We reckon that about half of current savers are not on track to hit the Pension Commission’s target replacement ratio and for people who only have DC pensions, only 3% are on track to that sort of measure for adequacy. And about half of those savers don’t know they are not saving enough.”

The problem is that many people think the minimum auto-enrolment contribution level is in fact a recommended amount for saving adequate funds, Walsh adds.

PLSA, under its ‘Hitting the target’ initiative, is focusing on ideas for raising awareness and helping people do more to save effectively. “The pensions world has not had good answers to [the question] ‘How much should I be saving for my retirement?’ We’ve had ‘target replacement ratios’, ‘percentages’ – people just don’t get this stuff… All the research shows that people just don’t get percentages, so we want to steer clear of them.”

The PLSA has taken inspiration from Australia, where the industry has presented savers with the idea of ‘retirement standards’ based on three possible levels of income. The starting level is a retirement funded by the state pension, which offers the most basic level of comforts. This is followed by two more aspirational targets, in effect a middle level and a premium level.

For each level, a standard of living is expressed in terms of lifestyle options. It’s the difference between one stay-at-home holiday a year and two overseas ones; drinking cask wine, cheap homebrew, or quaffing finer beverages.

PLSA is couching these ideas as ‘retirement income targets’ and has commissioned academics to crunch the numbers. Focus groups have shown that people think that a person on a mid-level income would expect to be able to afford a second-hand car – a five-year-old Ford Focus, say – and one week abroad for their holiday.

Results from the academic work, most importantly those that set concrete savings numbers rather than percentages of salary, should be published in early February 2019 and the PLSA hopes then that pension providers will use the numbers in their literature.

Among other PLSA proposals are a mid-life financial ‘health check’ to review retirement targets – and perhaps even the possibility of retraining and reskilling around the age of 45.

“Just relax…”
While UK pension regulation does, for the moment, still take place within the wider EU framework, Walsh is asked about the EU’s revised IORP directive. Known as IORP II, this second Directive on Institutions for Occupational Retirement Provision is much more than a revision. The PLSA says it transforms the earlier directive with extensive new requirements on governance and communications.Among these transformations will be new governance requirements on risk management, outsourcing and internal audit. EU member states have until January 12 to implement it.

“There is some nervousness. Certainly I pick this up from PLSA members that January 12 seems to be fast approaching, so are we all supposed to be doing something for then? My message really is relax, because the government is making it clear that the January 12 deadline is for the government to act, not for pension schemes to take action. So by then, the government has to demonstrate to Brussels that it has done what it needs to do to bring the directive into force.”

He indicates that the directive will have a bigger effect on member states with less developed pension systems than the UK. For countries like the UK and possibly the Netherlands, it “doesn’t require us to do much at all that we weren’t doing already”.

Government has laid out technical regulations, which will go through Parliament for amendments. A consultation will follow for changes to the Pensions Regulator’s codes of practice, but the government has said it will as far as possible implement the directive with reference to existing practices, including legislation, says Walsh.

The final text of IORP II addresses one of the concerns raised by the PLSA that schemes would be deemed ‘cross-border’ simply by virtue of having beneficiaries (as opposed to active members) in another member state – a retired Brit living in Spain, for example. But the text now states clearly that schemes will not become cross-border simply because they have beneficiaries in another EU country.

Walsh says a significant intervention in the debate came when IORP II was closely based on Solvency II, the solvency and capital adequacy rules for insurance firms. PLSA, together with Pensions Europe, argued that pension schemes were different in character to insurers and needed a different solvency framework.

“I think we’ve been reasonably successful in winning that argument,” he says, adding that IORP II is now a “great improvement” on earlier forms.

Yet the issue of solvency rules in any future IORP directive resurfaces in our conversation about Brexit. Although Walsh says the pensions industry is quite often aligned with banks and insurers in their lobbying efforts – “as we all want a good City of London” – there are sometimes tensions between the industries, and solvency is one area.

He says it is important for the pensions industry to ensure that as part of a deal on continuing UK compliance or equivalence with EU regulation, future compliance with the next edition of the IORP directive is not included, because “there will be an IORP Mark III at some point in the future”.

Explaining his reasoning, Walsh points to pressure applied by some insurers – he says some French firms, for example – to introduce more solvency requirements for pension funds.

“They view the pensions [industry] as a bunch of competitors [and] they want similar solvency and capital requirements loaded on to the pensions side.” IORP Mark III would be – without the UK in the EU to influence regulation – the vehicle.

“We have to make sure we are not bound by a system that would enforce that,” says Walsh.

Thanks to a chance meeting on a train with the UK Brexit negotiator, and with a £1 trillion bargaining chip, the UK pensions industry may still exert influence over Brussels.