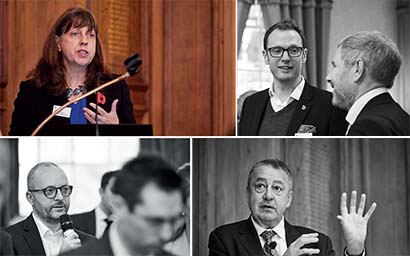 A recent DC pensions seminar, organised by CAMRADATA with Funds Europe’s involvement, covered many industry developments, including master trusts and the roles of trustees.

Not all topics to do with DC pensions were covered at the CAMRADATA DC Seminar, but as many as could be fitted into one day were. That was a whole roster of subjects, from engaging the next generation of savers in pension plans, to post-retirement solutions for those in retirement. Almost, if not completely, everything under the sun.

A number of pensions professionals either presented or discussed topics, including master trusts and pensions policy, at the event in London in November. Presenters included representatives from PS Aspire, which like CAMRADATA is part of the Punter Southall Group.

Along with them were: Tony Filbin, chairman of Capital Cranfield, who presented about the role of trustees in the new DC landscape; and David Whitehair and Rebecca Peche of Franklin Templeton Investments, who spoke about engaging the next generation of pension savers.

They were joined by Emma Douglas, head of DC at Legal & General Investment Management, who talked about post-retirement solutions, and Paul Budgen, of Smart Pensions, who presented about master trusts.

For the keynote interview, the editor of Funds Europe magazine, Nick Fitzpatrick, spoke to James Walsh, EU and international policy lead from the Pensions and Lifetime Savings Association.

During the event, which acted as the springboard for the launch of this DC pensions report, Walsh reflected the concern of many that – although auto-enrolment was the most positive development in UK pensions policy in many years – the key challenge was still to get people saving adequately and engaging more with their pensions.

The high level of scheme members who are auto-enrolled and remain in a DC default fund arguably reflects the low level of engagement that the typical member exhibits. An overview of DC default funds was given by Christos Bakas, of PS Aspire, who highlighted the range of differences between default funds in regard to asset allocation and risk.

The extent to which the average member may be prepared to pay attention to this is debatable, but there is undoubtedly a need for plan sponsors and providers to help. Member communications was a strong theme at the event.

Another was simplicity, an area where innovation is the key. While discussing innovation in DC pensions, the seminar heard of the need to give members a platform for all their net worth. These are platforms containing not only pensions statements and projected income, but bank balances and house values. Again, everything under the sun.