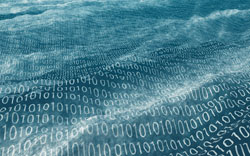 Digital technology means economic data has never been so abundant. In a market dominated by Reuters and Bloomberg, Alix Robertson reports on how smaller companies are getting in on the act.

Paul Julius Reuter arrived in London in 1851 with experience of running a news and stock price service on the Continent using cables and more than 200 carrier pigeons. By the 1980s, Reuters was a household name.

For decades these two names have been synonymous with delivery of market data and news. Yet the world of data provision is shifting again.

With the rise of social media, mobile applications and machine learning (algorithms that can learn from data), new players are entering the field, offering innovative alternatives to the mainstream and catching the eyes of investors.

BARELY A BLIP
One example is Now-Casting Economics, which started in 2011 and publishes high-frequency economic forecasting data. The company attempts to gauge the economy in real time, unlike public data releases, which lag. Now-Casting’s model draws on a variety of information, from GDP to consumer confidence surveys. It puts out an extensive range of timely forecasts, which sometimes offer a different economic picture from its rivals.

Jasper McMahon, chief executive officer of the UK-based company, cites the example of the “terrible” first quarter 2014 numbers for the US when, following a severe winter, GDP dropped, initially to zero and then further. McMahon says the Now-Casting forecast over this period “barely blips” as the variety of information inputs helps the model to take anomalies in its stride.

“There were these incidental factors going on, there were things affecting the GDP quarterly number, but the US economy was just fine,” he says.

The internet has assisted companies like his own by removing the need for terminals such as those used by Bloomberg and Reuters.

However, the problem now is not access to information, but the quantity of it. “There’s just a wall of noise out there,” he says.

McMahon says the impartiality of using a statistical model, which works via an algorithm and therefore avoids human bias, is a big advantage. “There is no opportunity to be conservative or cautious,” he adds.

A further advantage is protection against herding. “If you look at the forecasters on the street, you find that they do cluster a lot… If you’re going to be wrong, as a forecaster you’d rather be wrong as part of the pack, and for most of them there’s more downside to making a wild, bold forecast then there is upside.”

In contrast, McMahon claims using a machine to make forecasts has special value for fund managers looking for raw data to work with. “It is purely a machine, so it has no shame. It has no embarrassment, it just spits the numbers out,” he says.

BACKED BY GOOGLE
The presence of innovators in the world of data provision is widespread. Other examples include Premise Data in the US, the Local Data Company in the

Premise Data, based in San Francisco, develops economic and business indicators – such as food staples price indexes, which track daily changes in the prices paid by urban consumers – in more than 20 countries.

The firm draws information from websites, but also pays ordinary people around the world, developing countries included, to take pictures of items in their local stores or markets, which are uploaded to the Premise platform via a mobile application.

The company has some notable backing, working with advisors such as Hal Varian, the chief economist at Google, and Alan Krueger, professor of economics at Princeton University. Bloomberg also redistributes Premise data through its terminal.

Based in London and Barcelona respectively, the Local Data Company and Eixos started independently, but established a partnership when the founders met at a conference and realised the similarities in their work.

Both are focused on the retail sector and gather the bulk of their information on the ground. Barnaby Oswald, managing director of the Local Data Company, says his data has value for anyone who owns, occupies or loans money against a retail asset. The company’s client base is primarily investors, including UBS and Goldman Sachs.

As well as gathering information at street level, such as footfall, or the number of empty retail units in an area, the Local Data Company also draws on government data such as population spend from the Office of National Statistics and has partnerships with a number of universities.

David Nogué, chief executive officer and founder of Eixos, says that providing a unique source of information opens up new opportunities. “I see more potential collaborators than competitors at this point, because what we’re doing is the dirty work that nobody wants to do. Everybody is talking about data mining but they do everything but go down the mine. We do that.”

Eixos is working towards an app launch and aims to collect data in cities all over the world.

HEAVYWEIGHT OPINION
It is not only smaller startups that are exploring the market of data provision. Karl Zandi, managing director for data services at Moody’s Analytics, a subsidiary of Moody’s Corporation, says his company’s information goes beyond data provision to gather a bigger economic picture.

“In the US, for example, or in Europe, Brazil or China, there are multiple markets, there’s not just a national economy,” he says.

“The real estate market in Schenzen is significantly different than Beijing.”

While Moody’s Analytics has impressive scale, producing data forecasts from thousands of geographies each month, he says the company remains sharply aware of the value of smaller players.

Zandi adds: “The question was asked when we started: ‘How can you compete with an expert in some local economy?’

“Their relationships on the ground provide them with certain types of information that are idiosyncratic to that particular economy, and that is a very valuable service.”

The answer, he says, is about understanding how those small pieces fit into the whole puzzle.

“We provide the comparability that the expert lacks. The problem with that expert in Paris is that he knows nothing about Berlin. You still need to be able to draw them together.”

Zandi adds that this process of exploring the big picture is becoming easier, thanks to a “democratisation” of data.

“The worker in Paris no longer is siloed, he can now communicate very easily, work collaboratively and, more importantly, the information which he has access to has become more widely available.”

Though the landscape of data provision is shifting, the continuing popularity of the big players shows that despite their size, they can remain nimble.

Asked about the rising competition, Thomson Reuters, as Reuters is now called, remains confident in its position in the market. Ranjit Tinaikar, managing director, global advisory and investment management, and Susan Lundquist, head of product strategy – asset management, cited the quality, quantity and variety of Thomson Reuters data as factors that help the company to stay on top.

They also pointed out that, given its resources, the company is able to keep up with customers and industry bodies around the globe. This is enhanced by frequent technology innovations, such as the development of Eikon – its financial analysis desktop product – which offers features such as map-based visualisations of macroeconomic data.

“There’s lot of interest in anything that gives you a chance to find a new way of generating alpha, anything that help you be more efficient. It all comes back to having an information advantage.”

The originality and timeliness of these providers is important, Lowry says, but asset managers need larger companies to help them find the right information.

One thing, however, seems clear in the world of data provision: even though size still matters, the potential for collaboration is increasing and will be an important tool for small or new companies.