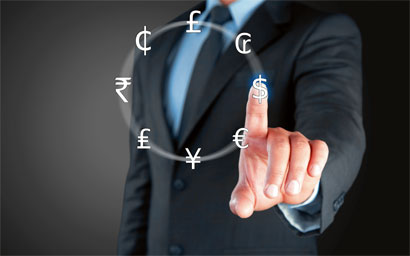 Massive moves within major currencies are a hallmark of 2015, and one way investors have tried to capitalise on this is with smart beta. David Stevenson looks at the strategies involved.

Smart beta has had a foothold in asset classes such as equities and fixed income for some time – but can it be used in currency markets?

It’s an issue that concerns the ‘smart beta’ label itself. Some would say if there’s no beta in currency to start with, how can there be a currency smart beta?

Whereas equities are most certainly an asset class, there are some who question whether currency is. It is a highly liquid market, trading over $5 trillion (€4.5 trillion) a day, but as Wood-Collins indicates, you
can’t simply hold currency to generate a return.

As Thomas Lee, senior portfolio manager at Parametric, a subsidiary of investment management firm Eaton Vance, says: “There is no buy-and-hold portfolio which represents the asset class, which makes it inconsistent with other commonly accepted asset classes like domestic equities or international fixed income. For this reason, among others, we argue that currency does not qualify as an asset class.”

Labelling aside, strategies or factors exist that are seen as being particularly suited to currency, such as carry, trade and volume. But according to Catherine Yoshimoto, senior product manager for FTSE Russell’s benchmark indexes and data products, this is still the subject of ongoing academic research.

Each of these factors has its own set of advantages and pitfalls but the Russell Conscious Currency Index (RCCI) contains all three, leaving the investor to decide how best to use them.

“Someone using these indices should know what they’re doing because they can go negative. They want to get into currency and are aware of the downside of the risk,” says Yoshimoto.

James Price, a senior investment consultant at Towers Watson, is concerned that smart beta is now so popular, some asset owners may be buying into strategies they have not given appropriate consideration to.

Some of these factors are similar to those found in equities. For instance, ‘value’ is similar to the equity market’s value factor and is based on the tendency of currencies to revert towards long-term purchasing power parity (PPP). ‘Trend’ can be likened to equity’s momentum factor and is based on the tendency of currency movements to persist – that is to say, appreciate or depreciate. ‘Carry’ is slightly different, as it concerns borrowing a currency in a low-interest environment and investing it in an economy with higher interest rates, giving greater returns.

Of these three factors, which are all contained in the RCCI, value is the only one that has performed positively in the year to date, according to Yoshimoto. However, the indices have performed well across all three factors from the RCCI’s inception in November 1999 to March 2015, returning 3.81% for value, 1.62% for trend and 5.15% for carry.

Parametric’s Lee argues that carry has been the dominant factor used to generate currency returns. He admits that there are periods when carry does not work, but says it remains the primary driver of most currency strategies. Value and trend are frequently used to enhance basic carry strategies.

One issue with trend is that it can lead to investors herding into a currency that is seen to be appreciating. As with any factor-based investment strategy, there
is the potential for a trade to become crowded.

Wood-Collins says that developed market currencies move in cycles and “trend following can pay off in a cyclical market, but they do so over different time periods”. However, there have been some strong influences on currency markets in recent years, in particular the actions of central banks.

CENTRAL BANK INTERVENTION
Typically, smart beta strategies are derived from an observation of a market trend or an empirical relationship that has existed through time. In the case of currency, this may be something as simple as understanding that shorting the currency of a country with a low interest rate and going long the currency of a country with a high interest rate (the carry trade, in other words) has historically produced a positive risk-adjusted return in most periods.

That said, central bank intervention can produce an environment in which traditional relationships no longer hold for an extended period of time. This outcome can materially impact the performance of a smart beta strategy. The impact will be greater when the actions of a central bank are not anticipated by the market, as was the case with the policy change by the Swiss National Bank in January when it removed the Swiss franc’s peg to the euro. If an investor was short the euro, they would have made substantial losses.

The impact is likely to be less extreme when a policy change by the central bank is anticipated, as is the case with the potential rate hike by the US Federal Reserve.

Central banks have had an impact on forex markets in recent years as the majority have been loosening monetary policy. Wood-Collins, of Record Currency Management, says the actions of central banks have impacted the three main factors within currency, but that carry trades have been hit particularly hard as interest rates have been falling globally.

The prospect of monetary policy divergence has encouraged investor interest to come back though, he adds.

RAISING ALPHA
The divergence of the US and Europe’s monetary policies may be a key way of capturing alpha. Price, at Towers Watson, sees the use of smart beta risk premia as a way of aiding active managers.

Alternatively, one firm of fund managers replaced its active managers because they didn’t think they were adding value, says Yoshimoto. “It’s difficult to explain individual performance and then point to an index that has clear and objective guidelines and ascertain how and why the index performed as it did,” she adds.

Active managers can add value if they see a factor that is going to impact their portfolio, she notes. If credit and carry factors were to correlate, for instance, this could encourage a manager not to use the out-of-favour carry, as factor selection is a major point in currency management.

Price says that skill, combined with which factors are in favour, will secure active managers’ fate. He recalls that a couple of years ago, the trend factor was not performing well as markets were not trending, and that this may have caused asset owners to make drastic decisions.

He says the ‘this manager is not delivering what I was expecting’ attitude “might have led to them terminating those managers which had done well, given the market environment for trend”.

However, with currency markets in a constant state of flux – last month’s near-2% renminbi devaluation against the dollar is a good example of that – Price suggests that asset owners should look at the wider picture. Has the manager performed well in spite of a headwind in a smart beta strategy? He draws a parallel with active equity managers, who may produce poor absolute returns but still beat the market. He also acknowledges that it’s not all skill and that smart beta carries some importance.

“[If a] manager does really well, it is recognised that some of that will have been skill but also some of it would have been that they were exposed to that smart beta,” he says.

CHANGING TACTICS
One of the attractions of the RCCI is that although it carries all three factors in different indices, it is possible for an investor to choose which one they think will bring the best returns. It also has an index that takes an aggregate of all three factors. The RCCI is recalculated on a monthly basis, so it is difficult to be caught out by market moves unless they happen without any warning at all (such as the Swiss removing the peg to the euro).

“Our clients don’t take on the full risk, they take positions of currency forwards. The risks are smaller than putting all of their money into dollars or euros, it’s a smaller risk to their portfolios,” says Yoshimoto.

Currency smart beta, despite debates over semantics, seems here to stay and has the potential to be used as simply a passive instrument and as a benefit for active management.