One of the main selling points of ETFs is their accessibility. From a multi-billion-euro pension fund to a working mother with a small inheritance, anyone with the money can buy ETF units. 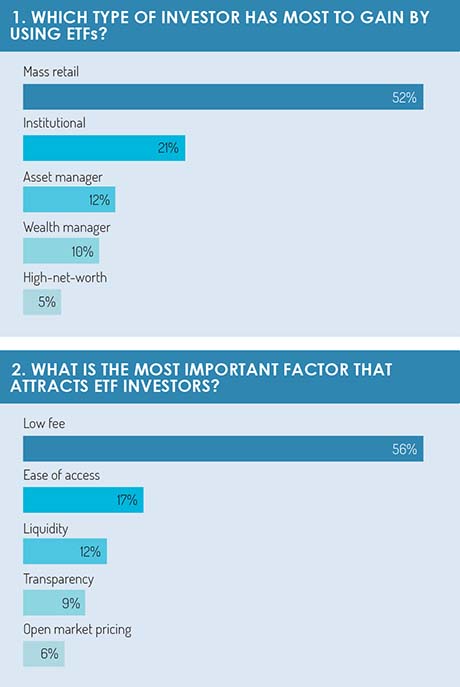 But which type of investor has most to gain from using them? We asked our respondents to name one investor type out of a list including mass retail investors, high-net-worth individuals, institutions, asset managers and wealth managers. The results were fairly clear: 52% of respondents said mass retail investors had most to gain (see figure 1). There seems to be a common view that ETFs are a democratic product: a fund for the people.

Clearly there are many reasons to invest in an ETF. Some use them for day trading, others to gain exposure to a broad asset class, such as US equities, in a quick and efficient manner. We asked our respondents: if they could pick only one factor that attracts ETF investors, what would it be? Among the options were: ease of access, liquidity, transparency and open-market pricing. The most popular result by a large margin, attracting 56% of responses, was ‘low fee’ (see figure 2). ETFs, to put it bluntly, have a reputation for being low on costs . And who doesn’t love a bargain? 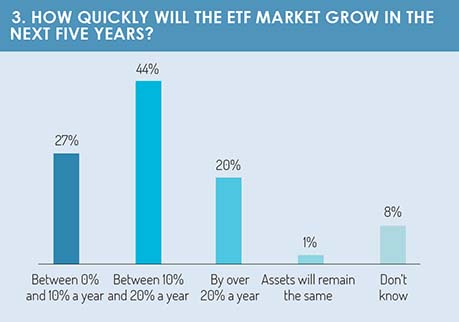 European ETF assets have grown rapidly in the past decade, increasing from $138 billion in 2007 to $686 billion as of June 2017, according to ETFGI. Given this rapid growth, it is natural to expect further inflows into these products. But how fast will this growth be? According to 44% of our respondents, the ETF market will grow at between 10% and 20% a year in the next five years (see figure 3). This is a healthy rate. Growth of 10% a year would mean the European market would be worth $1.1 trillion by 2022. Growth of 20% a year would lead to $1.7 trillion of assets by that date. (A fifth of our respondents predicted that growth would actually exceed 20% a year.)

It is telling that only 1% of respondents judged that the assets in the ETF market would stay the same. As far as our respondents are concerned, ETF assets are only going one way: up. 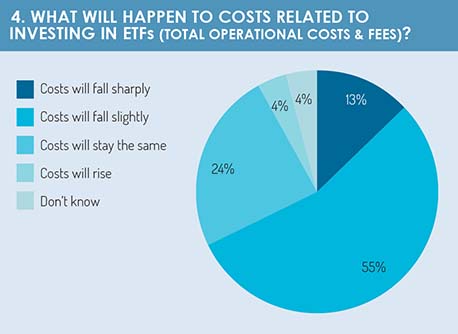 But, just as assets are going up, costs are coming down. Only 4% of respondents expected the costs related to investing in ETFs (total operational costs and fees) to rise (see figure 4). In contrast, 68% thought costs would fall, of which 13% thought they would fall sharply. This is good news for investors, who can expect to give away less of their invested capital to fund managers, custodians and administrators. But this finding is, perhaps, a concern for the providers of ETFs, which have already slashed their costs in competition with one another for assets. At some point, the question will have to be asked, how low can costs go? Clearly, our respondents think there is room for more cost-cutting.