One of the consequences of a greater proportion of self-directed investors in the market is a greater need for financial education. If today’s fund buyers are more empowered than before, it stands to reason that they ought to be better equipped, mentally, to determine which funds are right for them. Respondents generally agreed that investors are more sophisticated than they were in the past. The statement, ‘Financial education has improved – today’s investors are more sophisticated than they were five to ten years ago’ met with agreement from 58% of respondents, and was disputed by 21%, while another 21% were neutral (figure 11). 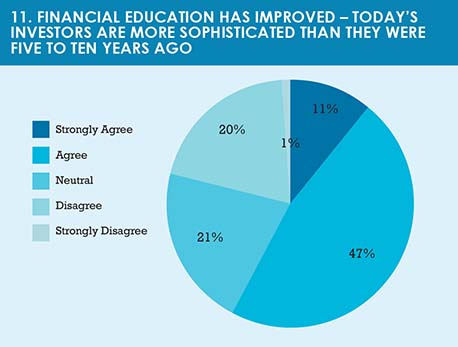 Future models
As stated at this start of this review, disintermediation is changing the way funds are distributed. But what entities will become the most important distributors of funds? We asked respondents to rank the likely importance of five channels in ten years’ time (in the chart below, a higher number indicates a greater expected importance).

We also asked respondents if retail specialists such as Amazon or Google, neither of which is substantially involved in the funds industry at time of writing, would become important distributors. Respondents also had the chance to estimate the importance of a ‘wild card’ factor – new entrants to the market that are not yet known.

Based on average ranking, the 150 people who answered this section of the survey predicted that online direct access models would be the most important channel, followed by independent financial advisers, banks, retail specialists and unknown new market entrants (figure 12). 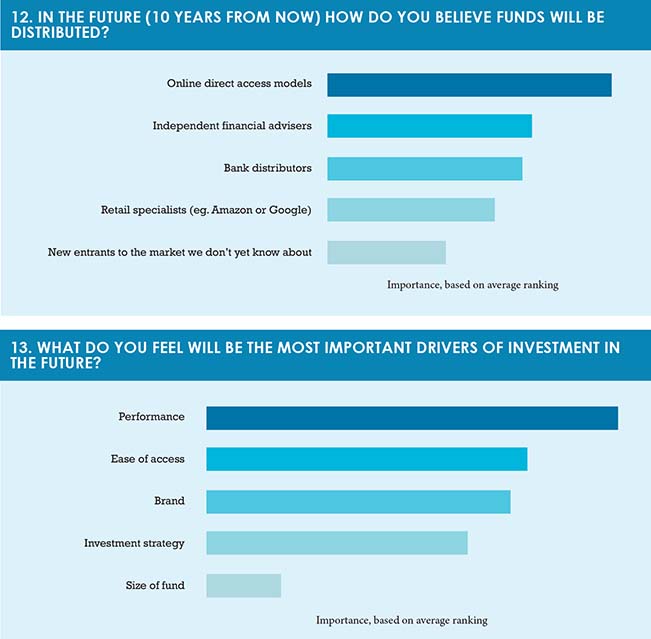 The survey also sought to establish which qualities among funds would be most decisive in attracting investor flows. Would brand be more important than investment strategy in ten years’ time? How important would accessibility be?

The ranking was clearer for this question than for the last. Respondents judged that performance would be the most important factor, followed by ease of access, brand and investment strategy. Fund size was predicted to be the least important factor by a large margin (figure 13).

The final question asked how investors in the future were likely to get investment advice. The average ratings were close together, indicating that respondents did not, on the whole, have a clear idea about which methods would dominate.

The good news for investment advisers is that they were predicted to be the most important source of advice in ten years’ time, followed closely by independent rankings and peer group advice, which were tied (figure 14).

Robo-advisers came next, but the average ranking was close to the top three. The only method that was clearly not favoured was social media.

Disintermediation is one of a number of factors affecting the evolution of fund distribution. This survey indicates a strong belief that open architecture is in the interests of investors, that robo-advice has a role to play in serving clients (though this is disputed by some), and that passive funds are anticipated to be a key part of fund portfolios for many investors.

The future is uncertain, but the results of this survey indicate some possible directions of travel. Clearstream and Funds Europe plan further in-depth surveys to probe the issues uncovered in this report, with a further piece of research on ETFs scheduled as the next in the series. We hope the results of our work prove useful to those in the asset management industry who are planning their strategies for the future.