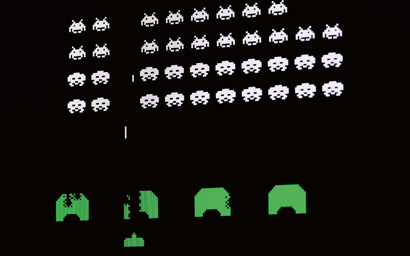 Nicholas Pratt examines the development of ‘distributed ledger technology’ and the claim that it could transform clearing and settlement.

The ‘blockchain’ has been described as being as important as the combustion engine, the email for money, and the Lego Mindstorms for building economic and social institutions…

The blockchain acts as a distributed database (where data is held by different devices) that can maintain and update an ever-changing list of records. When combined with cryptography, it becomes resistant to tampering and unauthorised revisions.

Bob Greifeld, the chief executive of Nasdaq, which is employing the blockchain for its pre-IPO private shares platform, believes blockchain could be “as impactful for the back office as electronic trading was for open outcry”. The Bank of England has called it “the first attempt at an internet of finance”.

Blockchain’s most common application has been to act as the distributed ledger for the cryptocurrency bitcoin, but it is now being explored for a variety of post-trade processes, including clearing and settlement.

Proponents say the use of blockchain technology rather than centralised, server-based platforms would reduce the time, cost and counterparty risk of clearing and settlement. A 2014 Oliver Wyman report estimated that the industry spends as much as $80 billion (€70.6 billion) annually on post-trade processes, with most of that money going either to depositaries or the numerous agents employed along the settlement chain. By employing blockchain technology, this fee can be drastically reduced as counterparties can deal directly with each other.

The case for blockchain is led by a number of start-ups designing software that will make it suitable for post-trade processes on an industrial scale.

Blythe Masters, the former JP Morgan banker credited with ‘inventing’ credit default swaps, is fronting a venture called Digital Asset Holdings and has urged the banking world to take it as seriously as the internet in the 1990s. And in June, a new venture called SETL was launched, led by Peter Randall, former chief executive and founder of equities trading venue, Chi-X (see box).

Investment banks have also been hard at work developing their own blockchain projects.

DEVELOPING A PROTOTYPE
“This is not just a buzz. This is serious,” says Jean Devambez, global head of product and clients solutions at BNP Paribas Securities Services, which has been working on blockchain and other digital initiatives for four years, developing proofs of concepts. “The purpose is to discuss potential uses in post-trade with clients, to see if the interest is there to develop a prototype.” The bank is working with two types of client: brokers and asset managers.

It is still not totally clear which parts of the transaction life-cycle – from pre- to post-trade, and from execution to settlement – could be covered by the blockchain. From a technical perspective, the benefits of the blockchain are clear. But, says Devambez, there are still a lot of gaps in terms of the functional perspective. Examples of this are reporting; connections to existing market infrastructure; compliance and legal issues; and safety and segregation of assets.

“Whenever you look to replace market infrastructure, you end up with questions but a lot of these projects are starting with a smaller scope so they do not have to answer them all right now.”

Perhaps unsurprisingly, the incumbent clearing and settlement providers are not as evangelical about the potential of the blockchain, especially when it comes to using it for traditional instruments such as equities.

“In terms of asset classes where there is an existing collective safekeeping, I have not identified any quick wins with the blockchain,” says Diana Chan, chief executive of EuroCCP, the largest cash equities clearer in Europe. “But I think it is an interesting technology that may offer benefits for those asset classes where there is no collective safekeeping. So let’s continue to explore its use for private assets and then come back to it, once it has matured in these asset classes.” 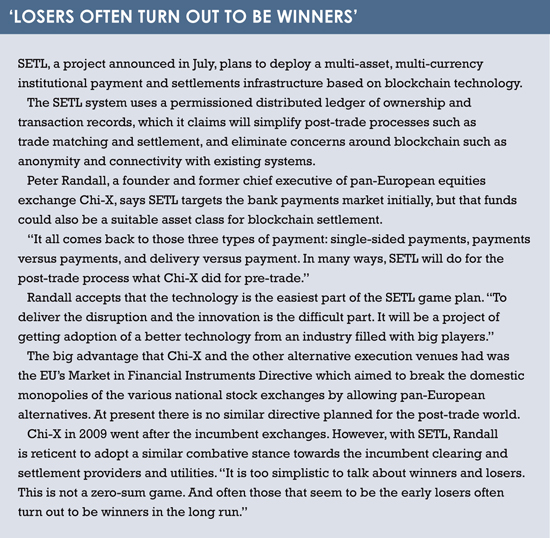 Chan’s argument is that most of the benefits offered by the blockchain – no single point of failure and a robust audit trail – already exist in the current structure: “In equities, the central securities depositary (CSD) holds the root of title and provides collective safekeeping. They have been constructed within a legal framework, so they have a legal status. It has worked well and I am not aware of any dispute over this structure. With the blockchain there is no legal status yet. For fixed income there is securities law, and for derivatives there is contractual law. So if these asset classes are to be held in the blockchain, they would most probably require a different legal framework.”

CLOSED COMMUNITY
Governance is another issue. A distributed ledger for the professional financial services sector is probably going to be a closed community.  “Who decides on the membership? What about the rules of membership? What about competition law? How many of these clubs will there be and how will they all interoperate?” says Chan.

She also questions the idea that the blockchain would streamline back-office processes. For example, the blockchain may have the ability to create one record for different intermediaries, but it would not prevent exceptions where one of the counterparties has an operational issue, such as an unmatched or late instruction.

It is also suggested that blockchain-based settlement removes the need for so many intermediaries in the settlement chain, although Chan says that all these intermediaries – custodians, prime brokers and brokers – provide indispensable services elsewhere for investors and cannot be so easily dispensed with.

Then there is the netting provided by most centralised clearers. EuroCCP clears 5-6 million trade sides a day; about 99.5% of those are netted away at the end of the day, so there are only around 30,000 obligations to settle.

“There is a suggestion that the blockchain could be applied to each order and that those 6 million trade sides could be settled instantly. But I cannot see the logic in that. Would settling 200 trade sides instantly really be more efficient than settling one netted obligation?” says Chan.

FOR FUTURE USE
These questions will not stop the development of proofs of concept, says Chan. Nor should they lead to a hasty rush to regulate the technology, because that is a certain way to limit any innovation. “As long as it is for the interbank market or for sophisticated professional investors, and it is commercially viable, blockchain-based clearing and settlement can be a positive thing. But I think it is best suited to the asset classes that have not been created yet. I don’t think you want two versions of the same shares – in the blockchain and in a CSD.”

BNPP’s Devambez agrees that the blockchain may, in the short term, be best suited to instruments that have no established infrastructure and where it could provide some instant standardisation, such as funds and fund shares. However, he also says that applying the blockchain to listed instruments cannot be dismissed and could be the focus of a second wave of blockchain platforms and projects, provided that the industry can solve the governance issue and create a secure framework for other activities, like connections to CSDs and safekeeping of assets.

“In the next 12 months I expect to see a more mature market for the blockchain and its use for clearing and settlement and even execution,” says Devambez. “By then, I think we will see some limited live activity. The first projects will deliver some partial solutions which will be subject to further evolution over the next two to three years.”