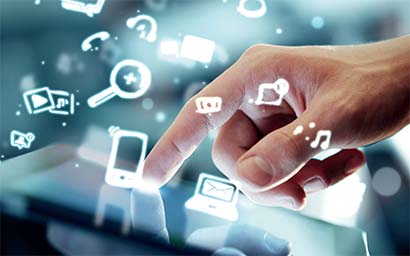 What does a world with two competing technology leaders look like for investors – and for the public at large? Romil Patel reports.

China has grown into a modern-day global technology powerhouse, having gathered momentum through a combination of factors. These include, but are not limited to, consistent growth on R&D spend; more science, technology, engineering and maths (STEM) graduates per year than any other place on earth; and a series of rapid developments in networking – from 3G to 4G and now 5G – which continue to open up a new world of innovative services.

Situated just across the border from Hong Kong, Shenzhen was a small fishing village in the late 1970s with a population of approximately 25,000, GDP of 196 million yuan and total export volume of US$9.3 million. By 2018, the number of permanent residents had topped 12.5 million, GDP exceeded 2.4 trillion yuan – surpassing Hong Kong for the first time – and a year earlier, total export volume was in excess of $244 billion. That’s a 9,565-fold increase on 1979, according to UN figures.

Today, the technology hub is home to well-known names in the West such as Tencent and Huawei, but also to lesser-known giants such as electric automaker BYD and the world’s largest drone maker, DJI. Between 2013 and 2018, “Shenzhen successfully reached innovation-driven development and the highest echelon of the global industrial value chain,” a UN report on the city’s economic, social and environmental transformation notes.

But as it continues to move from a manufacturing to a services-based economy, where is it poised to lead – and what roadblocks does it face amid heightened geopolitical tensions, coupled with foreign investors looking to increase their exposure on the mainland?

The tech frontier
Tech is the next frontier of economic growth (see Comment 1), as evidenced by the development in the broader sector and continued building of infrastructure to support this. “China has launched the Star Board for innovation companies and is making it easier for these start-ups to raise funding,” observes Steve Lee, head of mainland China and Taiwan at HSBC Global Asset Management. “We have seen more than 100 new listings added to it and they have to raise a significant amount of money. Policies to support these developments have been rolled out in sectors like automobile, software, electronics, tech and semiconductors.” 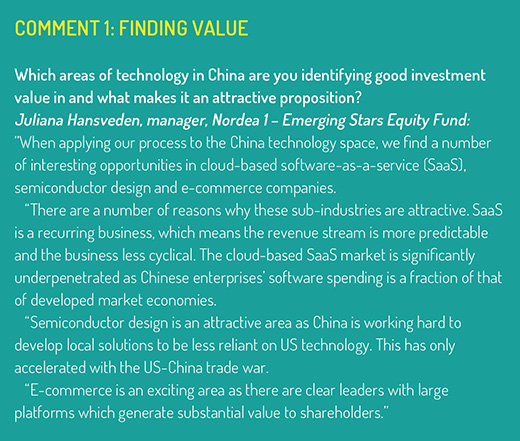 While China is undoubtedly making technology strides, there is still a gap versus its more developed counterparts in the West. To bridge the divide, China has accelerated R&D and may even account for the largest volume of R&D expenditure among national economies – but context matters. “When comparing economies based on exchange rate conversions to a common currency, there is still a very significant gap between China and the US, with R&D expenditure in the former equalling only 50% of gross expenditure on R&D in the latter,” the OECD Directorate for Science, Technology and Innovation notes. Therefore, a multifaceted approach is key.

As Lee points out: “China now ranks as the second-largest holder of patents and the rate of patents held by Chinese companies is increasing, so their size gives them a very good basic structure. In this type of large market, the reward for investment or risk-taking by investing in research and new technology is huge if you can get it right – and we are seeing that happening.

“Right now, for new technology especially, the mainland is a big market for them to develop as a testing ground, so this is what we’re seeing – more concentration on the domestic market.”

The most obvious sector for long-term investment opportunities in tech is 5G, as its adoption will enable digitisation, a key industrial policy goal for Beijing (see Comment 2, overleaf).

“5G is not about the consumer, it’s about industry, and that’s important for the next leg in China’s technological revolution, notwithstanding the issues surrounding Huawei,” says Michael Lai, senior vice president and portfolio manager at Franklin Templeton. “China has made that technological leap – 5G rollout started about nine months ago and we even have it in Hong Kong.

“It’s all about the industrial connectivity that will make machines able to communicate with one another a lot quicker – and hopefully, that will boost productivity.”

A data-heavy diet
The development of 5G will enable autonomous driving vehicles and machine learning, for example, and allow other service sectors to benefit from this increased bandwidth, but the fuel behind this driving force is data – and the scale of data available in the Chinese economy relative to the rest of the world is unparalleled.

The Chinese public, unlike their counterparts in the US or Europe, aren’t noticeably bothered by the privacy implications of apps collecting personal data from consumers. “The breadth and depth of what [tech companies] can obtain from that data is considerably deeper and more in-depth than where you can get anywhere else,” says Zhikai Chen, head of Asia equities and senior portfolio manager at Lombard Odier Investment Management (LOIM). “That also facilitates the studies and improvement in technology advances going forward.”

The 5G network infrastructure will itself facilitate studies and technology innovation going forward – but data will be critical to intelligent manufacturing and improved production yield, which was simply not possible in a pre-5G world. 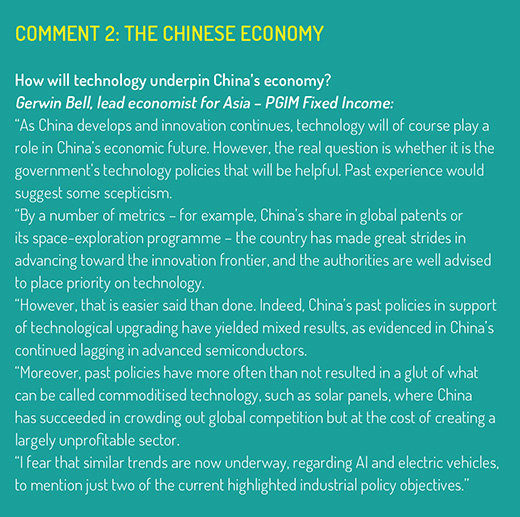 Roxy Wong, a portfolio manager at LOIM, says: “For autonomous driving, so much data must be collected for the car, such as road conditions, image processing from cameras and the condition of various parts of the vehicle fed through the network to make sure that it is safe and delivers enhanced performance.

“With all the data being collected, this will help to transform the city to a smart city in future and will definitely transform the way we live, but we are still some time away from that ideal world. It will probably take a long time, but China is leading.”

So, what does harvesting data to cater for services and build a picture of the Chinese population look like in a largely pre-5G world grappling with a coronavirus pandemic?

“You can’t get this type of big data information in the US or Europe, because the digital payment penetration in China is multiple times that of the US. You’re talking about 600 million users of mobile payment in China.”

Reducing foreign reliance
China has made significant advances as it seeks to reduce its reliance on foreign technology and promote per capita income growth, but geopolitical tensions have been rising consistently and technology has been the focal point (see Comment 3). How is this impacting China and, indeed, the world?

When it comes to software, there is little the US can do, given that the products are locally oriented and mostly sold in local markets. This makes it hard for outsiders to penetrate China, and for China to make inroads in the rest of the world. “The big picture is that they are very dominant on everything which is linked to software but lagging behind in everything which is hardware,” says Patrick Zweifel, chief economist at Pictet Asset Management. 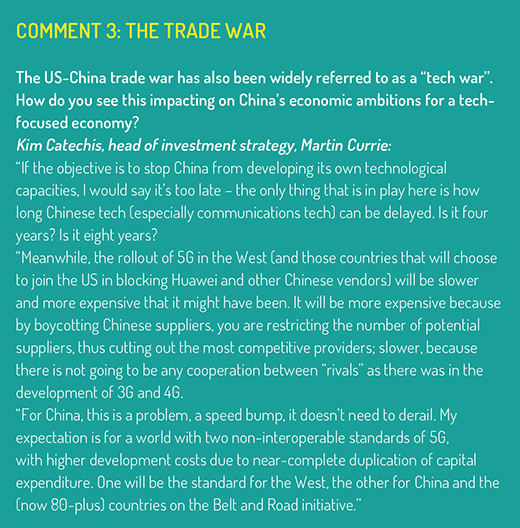 As of 2018, US firms accounted for 45% of the global semiconductor market share, dwarfing China’s meagre 5%, according to the Semiconductor Industry Association’s 2019 factbook. As tensions rise between Washington and Beijing, the latter is seeking to close the gap while the former looks to slow down Chinese development of hardware, mainly on the chip manufacturing and semiconductor side – predominantly because the manufacturing of semiconductors involves a lot of equipment, or IPs, which mostly come from the US and Europe. But this also represents a large opportunity set to investors.

“In the electronics world, China wants to upgrade its chips – this is from semiconductors and foundries all the way to chip design, chip testing and packaging – the whole ecosystem,” says HSBC’s Steve Lee.

“Recent events give them even more urgency to develop their own production of these mission-critical integrated circuit chips and to have the foundry be able to produce them on their own, so this is an area that we like. In terms of sectors or themes, many are developing because of this new paradigm.”

The common consensus in the investment community is that China cannot be halted in its technology advancements, but merely slowed down, and its ambitions will take some time to be realised.

This is likely to result in a global technology bifurcation, with China and the US at opposite ends – the former will become increasingly self-sufficient to cater to local consumers, while the same happens in the Anglosphere – but the pace of such developments remains to be seen.