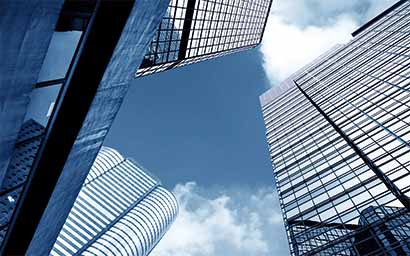 A survey for this magazine found that desire for Chinese investment is rising, with equities favoured – and yes, MSCI inclusion does matter. George Mitton reports.

In recent years, foreign investment in China’s capital markets has been more talk than action. Everyone knows it is madness to ignore Asia’s largest economy, yet the biggest investors in the US and Europe have typically been cautious about allocating money there.

Some of the reasons given for the hesitant approach – economic instability and legal ambiguity in China, for example – are reasonable. But as China grows in size and fiscal clout, managers cannot ignore this burgeoning giant. According to our latest poll, which is based on a survey of 74 readers of this magazine (see end for methodology), the message is starting to get through that Chinese investment is an urgent matter.

Index counts
The first finding indicates that the arrival of Chinese equities in major indices will drive a significant shift in investor allocations. Some 57% of respondents said the inclusion of Chinese companies to the indices published by MSCI changed their investment view on China.

MSCI began partially including Chinese mainland-listed stocks, known as A-shares, in the widely followed Emerging Markets index on May 31, 2018. In the near future, the index maker plans to include 5% of the A-share market but, if the entire A-share market were added, then Chinese equities, including offshore-listed stocks that are already included, would account for more than 40% of the index.

Although it is common to hear active fund managers disparage indices such as MSCI’s, and argue that investors should do their own research and not merely hug the index, our research indicates that the decisions of bodies such as MSCI do make a difference.

Stocks over bonds
The second finding suggests that equities are by far the most popular Chinese asset class among our respondents. Nearly four-fifths (79%) said they were invested in Chinese equities, compared with 38% who were invested in bonds (respondents could choose more than one answer to this question). Smaller proportions said they were allocating assets to Chinese multi-asset strategies or private equity or venture capital. Respondents who picked the “other” category were asked to state which asset classes they invested in. Answers included derivatives and private debt.

This finding shows that equities are still the leading method for gaining exposure to China. Our respondents were much less likely to invest in Chinese bonds, even though the Chinese bond market is the world’s third-largest.

In terms of investment method, active fund management was the most popular choice, chosen by 62% of respondents in the next question. Only 8% of respondents said they favoured passive asset management, which perhaps reflects the widely held view that passive or index-tracking strategies are less suitable for emerging markets than for developed ones. Fifteen percent of respondents favoured their own direct investment in Chinese assets through access schemes such as the

Connect programmes. An identical proportion chose what could be called the “traditional route”; they invested in China as part of a general emerging markets allocation rather than a specific China fund.

The importance of the stock market was underlined once again in the fourth finding, where 64% of respondents chose equities as their “primary interest” among China-focused asset classes. Interestingly, bonds did not even come second in the ranking on this question (only 9% said bonds were their primary interest). Private equity or venture capital was chosen by 11% of respondents, indicating a small but determined proportion of investors focused on these alternative asset classes.

Among the “other” category, respondents chose real estate, hedge funds and private debt.

Whatever the method, there was a strong indication among our respondents that the money invested in China would rise. A majority of 77% said they were likely to increase their allocation to China this year. That finding will be encouraging to managers of China-focused strategies.

But what are the main investment risks? Respondents were asked to choose which concerned them most this year. The answers were close but the most popular result was the US-China trade war, picked by 31% of respondents. Clearly, respondents are worried that a drawn-out dispute will create further uncertainty and perhaps throw up additional hurdles to trade, such as more tariffs. Economic slowdown in China came next in the ranking, chosen by 28% of respondents, after which was “government policy changes”.

Answers from those who selected “other” as a risk included quantitative tapering, a global market crash and problems connected to foreign exchange.

There are evidently many factors to be worried about regarding China’s capital markets, though the same could probably be said for any major market. The interesting question is whether these perceived risks will hold back outside investment in China or whether investors will overcome their fears.

The penultimate question addressed the topic of investment themes. Respondents were asked to rank six different themes in order of interest to them. We have then ordered the themes according to the best average ranking.

On average, the most popular theme was technology, media and telecoms (TMT). This sector, which includes fast-growing companies in China’s internet space, has justifiably captured investor attention in recent years. E-commerce, gaming and social media are just a few facets of this large and expanding segment, which seems sure to gather a good deal of foreign capital flows. 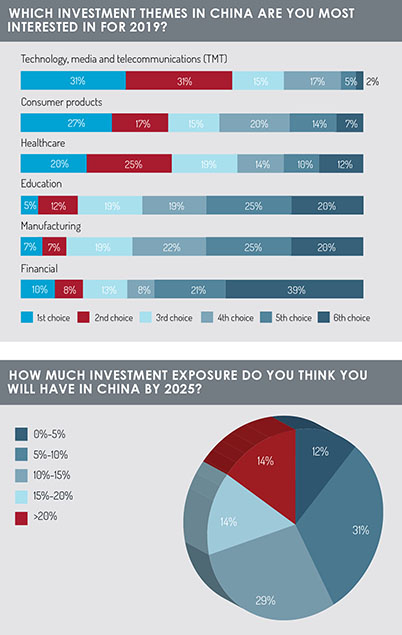 The second-most popular theme was consumer products followed by healthcare. It is notable that all of the top-three favoured sectors concern services and goods that are consumed domestically. In previous decades, China was viewed as an export-led economy in which foreign investment focused on companies producing exports. That is no longer the case. Indeed, China’s formerly dominant sector, manufacturing, came second-to-last in this ranking of investment themes, ahead only of the financial sector.

It is worth remembering that the sample in this survey is likely to be tilted towards respondents with a pre-existing interest or knowledge of China. A survey of the broad market might not reveal such enthusiasm for Chinese investment.

Nevertheless, this poll has discerned a significant optimism regarding investment in the Chinese market. This optimism seems likely to increase in the years ahead.

METHODOLOGY
A total of 74 respondents took part in the online poll. The UK accounted for 41% of these respondents, while the rest of Europe contributed a further 27%. A total of 23% of respondents were in Asia while 9% came from North America. Employees of asset managers accounted for the majority (59%) of the survey by occupation followed by consultants (22%), asset servicers (11%) and investors (8%). The poll was conducted online between February and March 2019.