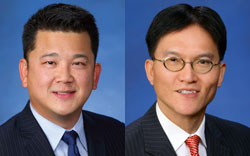 As China opens its capital markets and promotes privatisation, asset managers such as BNP Paribas Investment Partners, see a chance to generate attractive returns for clients.

In the past few years, the big story in Asia has been the gradual opening of China’s capital markets. The qualified foreign institutional investor (QFII) programme was followed by RQFII, which was followed by the launch of the Shanghai-Hong Kong Stock Connect. These initiatives have been compared to a series of bridges for foreign investment to cross into the country.

But the Chinese authorities are not only making it easier to invest in Chinese companies, they are also increasing the number of investable securities as part of an ongoing project that TF Cheng (pictured left), managing director and head of Asia Pacific for BNP Paribas Investment Partners, calls “the IPO of China Inc”.

With the encouragement of the authorities, more Chinese companies are going private – the most high profile of them being internet giant Alibaba. There has been a boom in corporate bond issuance too, both in and outside of the country. In addition, investment vehicles such as asset-backed securities are emerging as the authorities push state-owned enterprises to lighten their balance sheets.

“It’s not just the number of bridges, represented by QFII and so on,” says Cheng. “Securitisation will increase the volume of traffic on these bridges. We’re seeing the blossoming of the securities markets.”

GROWING
BNP Paribas Investment Partners connects its clients to the new investment options that are developing in China. The firm was awarded three tranches of QFII quota totalling $500 million under the QFII scheme and, with capital appreciation, this has increased to around $3 billion.

It also seeks to be a major player in the RQFII scheme, which allows investors to buy Chinese mainland stocks with offshore renminbi. The firm has an RQFII licence for its Paris operation, where the bank is headquartered as well as in its Asia hub Hong Kong.

Cheng hopes the firm’s global coverage will allow it to link these RQFII licences together, for the benefit of clients. “It’s almost like a global ATM network – each jurisdiction is like an access point into the Chinese liquidity pool,” he says.

Finally, the firm has operations inside China. Since 2003, the firm has had a 49% share in a joint venture, HFT Investment Management, which is based in Shanghai. In addition, it recently set up a wholly foreign-owned enterprise (WFOE) in the Shanghai Free-Trade Zone.

“We anticipate the opening up of regulations for investors and the market will start from there,” says Cheng, of the Shanghai zone. “Being there will give us first-mover advantage.”

NUANCED
All these developments give the firm increased avenues to connect international investors to Chinese assets, and by offering Chinese investors local and international funds. However, the firm’s research team has not allowed this enthusiasm to discolour its analysis of the economic situation in China. Although the internationalisation of the renminbi is imminent, Chi Lo (pictured right), Senior Economist for Greater China at the firm, has a more nuanced view. Internationalisation of the currency is coming, he says, but it will take time.

Most analysts see this as a policy goal of the Chinese government,” he says. “I’m not sure. When I talk to people onshore, none of them say this a policy goal. None say there is urgency in it.”

However, Chi Lo and his research team advocate patience. It is better for investors to think long-term, he says. “It could lead to market disappointment if it turns out China doesn’t deliver what the market is expecting.”

There are countless other items on the agenda of Chinese lawmakers and regulators in the meantime, and investors would do well to monitor these, he says. These targets include: keeping growth at a reasonable rate; narrowing the wealth gap; pushing for structural reforms; and tackling the problems presented by rapid urbanisation. Internationalising the renminbi is part of the process but not the most important part, says Chi Lo.

CHALLENGES
Indeed, there are some challenges that must be overcome before the Chinese currency becomes truly international. One is that outbound capital flows must rise to at least roughly balance inbound ones. The early experience of the Stock Connect programme, in which northbound trade has outweighed southbound, has led some to question if this will happen.

There may be good reasons for Chinese investors to display a home bias – their own country is performing well. Although growth has slowed to around 7%, the Chinese economy is still outpacing most of the world. Chinese investors can get a better rate of return from local money market funds than in equities from some developed markets. Plus, they keep their investments in their own currency, which is widely expected to appreciate in the years ahead.

How can Chinese investors be encouraged to invest abroad and solve the problem of asymmetric capital flows? One solution is by government intervention. “We can gauge how serious is Beijing’s attitude to internationalisation by looking at whether they are encouraging capital outflow,” says Chi Lo.

There are several initiatives under way, he adds, such as allowing five of the biggest state-owned enterprises to invest overseas for the first time, and establishing the Asian Infrastructure Investment Bank, a Chinese-led venture that will invest in infrastructure in developing nations.

Chi Lo believes these trends will increase the outflow of renminbi from the country, helping to balance rising inflows and aiding the internationalisation of the currency. For asset managers that are close to the Chinese market, this can only be a good thing.