Under the private fund manager (PFM) programme, foreign asset managers may enter into a joint venture with a domestic partner or establish a WFOE that operates as a private fund manager, offering open-ended collective investment funds targeted at qualified (typically institutional and high-net-worth) investors. 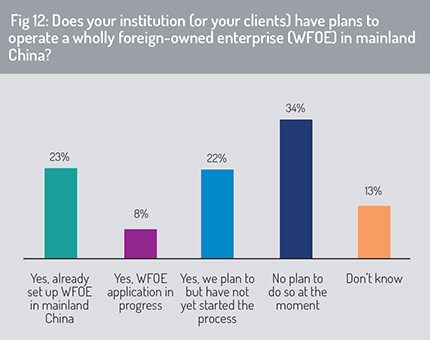 Initially, foreign asset managers were restricted to holding a minority stake in a JV. However, in 2018, AMAC raised the ownership threshold from 49% to 51% and, from April 2020, foreign companies have been permitted to own 100% of a fund management company on the Chinese mainland.

As a private fund, a PFM’s funds products may be sold to qualified investors but not directly to retail investors. The PFM must apply for quota for each new fund, with controls on the amount of funds it may raise, the number of investors it may have and the timeframe during which it can raise assets.

However, since April 2020, foreign fund managers may apply for a full fund management company licence which also allows them to market funds to domestic retail investors. 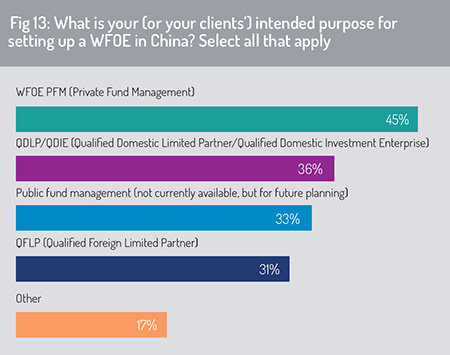 When asked how these regulatory changes have impacted their business development strategies on the Chinese mainland (fig 12), just over half of respondents said they have already set up (23%), have filed an application (8%), or plan to set up a WFOE (22%). In contrast, 34% said that they have no plans at the moment to operate a WFOE.

To provide context to these findings, it is primarily large international asset managers that can be expected to apply to establish a WFOE. It is a costly and complex process to create a local entity and this is unlikely to offer a short-term payoff. While this may suit the business development strategy of a large international asset manager with a sizeable (and growing) network of distribution partners in China, it is unlikely to be practical for most mid-tier and boutique asset managers (including most hedge funds) seeking to exploit opportunities for alpha generation in China. 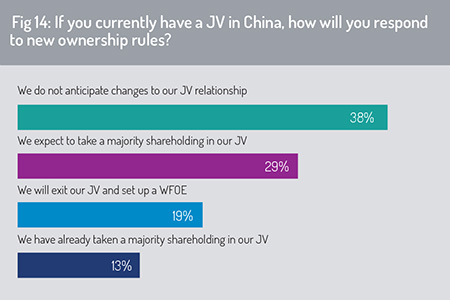 Public fund management is not currently available in China for foreign companies, as we have noted, but 33% said they are establishing a WFOE in preparation for when this option is made available. Just over 30% will establish a WFOE as foundation for Qualified Foreign LP structure.

For foreign asset managers that have JV arrangements in place in the Chinese market, 38% said they do not expect to change their JV relationship in response to recent changes in ownership rules (fig 14). In contrast, over 40% of respondents said that they had already taken a majority shareholding in their JV, or they expect to do so in future.

Few plan to exit existing JV arrangements and establish a WFOE in its place, with just 19% saying they would follow this course of action.

Rising importance of actively managed funds
“As China’s trade surplus gradually narrows and the vertiginous rates of growth delivered by some Chinese companies revert to more moderate levels, the opportunities for asset managers that are skilled at stock-picking will become increasingly important,” says Kellaway. This point is confirmed by the survey results, where 38% of respondents say that actively managed fund products are central to their investment strategies in China at the current time (fig 15). This figure will rise to 63% in two years’ time, with respondents predicting a surge in the importance of actively managed fund products for foreign investors in the Chinese market (fig 16). 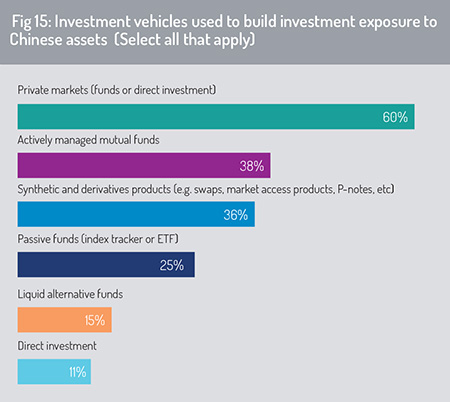 One asset manager told Funds Europe: “There is evidence of higher alpha in China versus other emerging markets, so it’s a strong market for active management where there is not a lot of institutionalised investment processes and therefore a good area to play from both a strategic and an active point of view.”

These survey results reflect China’s continuing growth to become the fifth-largest mutual fund market worldwide with assets in excess of US$2 trillion as of August 2020. Money market funds (MMFs) account for roughly half of China’s mutual fund assets, with retail investors accounting for approximately two-thirds of money market fund assets, according to ICI Global data. However, there is strong potential for retail investors to increase their holdings of risk assets in search of higher yield, particularly through a shift in allocation out of money market funds into actively managed equity funds. 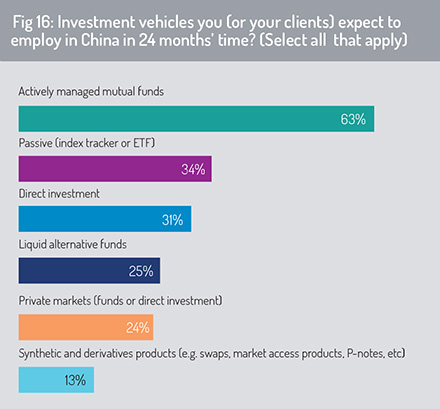 The survey predicts that this growth in investment via actively managed fund products will be accompanied by a contraction in investors using private market strategies (either direct investment or via privately managed funds) over the coming 24 months. Some 60% of respondents indicated that they (or their clients) invest via private markets currently, but this figure will fall to 24% within two years.

To date, passive investment products (index tracker funds, ETFs) have generated weak demand from Chinese domestic investors – where investment flows, as we have noted, have been channelled predominantly towards actively managed funds and MMFs.

However, the survey indicates that foreign institutional investors are prepared to increase their inbound allocations through passive investment products (rising from 25% at the moment to 34% in two years’ time).