Asset managers must think constantly about their strategies for innovation and technology improvement. with our latest survey of funds professionals in asia, we assess the situation on the ground.

It is important for asset management firms to have a well-designed technology strategy to compete at the leading edge of the funds industry. Technology tends to degrade quickly in the financial services world and using secure, well-tested software and systems that are updated regularly in line with new releases is essential.

Persisting with ageing technology could prove to be a false saving. A failure to stay current may not only lead to inefficiencies, but also contribute to security vulnerabilities and result in a significant increase in costs in the longer term.

Consequently, it is important for asset managers to think constantly about their strategies for innovation and technology improvement. Forward planning is important from the beginning of each new technology contract to ensure optimum performance from existing solutions and to stay current with new developments coming on to the market.

In this survey, we ask which new emerging technologies will have the greatest impact on the funds industry in Asia and where respondents expect these innovations to be developed. We assess whether the funds industry is good at adopting new technology and whether its ability to do so is improving over time. We ask which types of companies will be valuable partners to asset managers in driving business innovation and which will be the disruptors to this industry. We also evaluate changes in fund distribution strategies in Asia, exploring which distribution channels are most important and which will be dominant in the future. 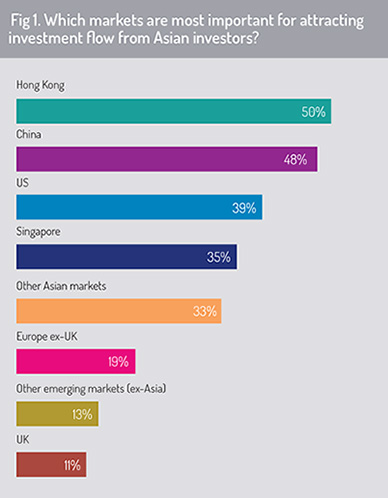 Fund markets in Asia
The first question asked our participants to identify which locations are most important currently as an investment destination for Asian investors. Hong Kong was the most popular response, but mainland China has emerged as a strong contender.

Specifically, in this year’s survey, 50% of respondents said Hong Kong is the most favoured destination for investment flow from Asian investors, with the Chinese mainland a close second at 48% (fig 1). The US, the world’s largest market for investment funds, came next.

Other non-Asian markets fared poorly, with the UK (11%), Europe ex UK (19%) and other emerging markets (13%) low down the list in terms of attracting investment flow from Asian investors.

In evaluating these results, we should be mindful of where survey respondents are located. More than half were based in Hong Kong, which may reveal a degree of domestic bias in the high level of responses for this market and the increasing prominence of China as an investment destination. Of the remaining survey constituents, 22% were based in Singapore and 11% in Taiwan, with other Asian locations accounting for the remaining 15%. 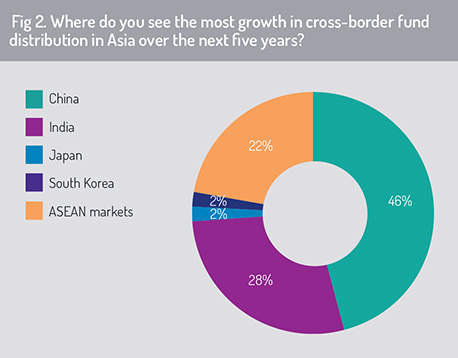 In the next question, we asked respondents which cross-border fund centre would be most important for fund distribution in Asia during the next five years (fig 2). China attracted 46% of responses, with India a clear second (28%). Respondents indicated that they saw no immediate rise in the prominence of Japan, the world’s third-largest economy in GDP terms, or South Korea, as centres for cross-border distribution in Asia.

India’s rise
We then turned to Asia’s emerging fund centres, asking which of these offer fund managers most potential for business expansion (fig 3). India was the leading choice, with 33% of respondents believing this South Asian market offered most growth opportunities to asset management clients. We have been waiting for India’s funds industry to accelerate for many years, driven by a population of 1.35 billion, a burgeoning middle class needing a savings and investment proposition, solid GDP growth over the past decade and significant, but long-awaited, investment in infrastructure development. But the market continues to present regulatory and fiscal complexities for cross-border investors. It is building from years of economic and social underinvestment and it is still characterised by high levels of income inequality. 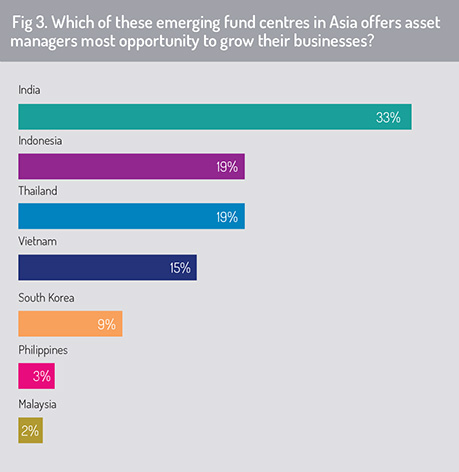 Clearly our respondents believe that India is beginning to address these constraints and is becoming an attractive destination for fund distribution. In last year’s survey, it ranked fourth after Indonesia, Thailand and Malaysia as the emerging fund centre in Asia most likely to provide best business development opportunities to fund managers. It has now risen to the top of this poll with a threefold increase in its share of total responses.

In the 2018 Asia survey, respondents told us that if a fund manager wanted to raise money in emerging fund centres in Asia, it should book a flight to Jakarta. However, Indonesia’s popularity in this regard fell to 19% this year, well down on the 42% of responses it attracted 12 months ago.

Thailand remained in second place (level with Indonesia) with a small contraction in its share of responses. However, Vietnam is attracting renewed interest, almost doubling its share to 15%. In contrast, the outlook for Malaysia deteriorated, dropping from equal third in last year’s survey (11%) to the least popular in the emergent Asian fund centre list with just 2% of responses.