Having explored growth opportunities for the investment funds industry in Asia, we then looked at the impact that technology development will have.

From a list of emerging technologies, we asked respondents to select those they think will have the biggest impact on the funds industry (fig 4). This question was also included in the 2018 survey, although the list of responses has been slightly amended this year. 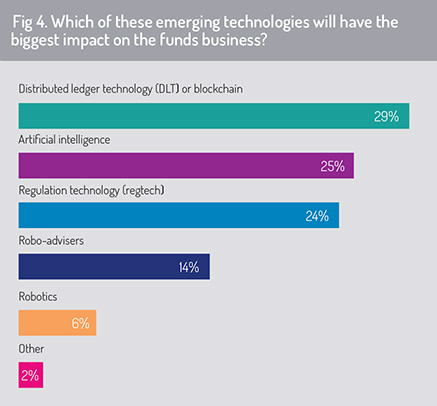 The most popular response in this year’s survey was distributed ledger technology (29%), followed by the use of artificial intelligence (AI) models (25%).

This result replicates the dominant answers provided in last year’s survey, although the gap between these technology types has narrowed significantly – in 2018, 44% of respondents told us that DLT will have greatest impact on the funds industry, compared with 21% for AI. This suggests that Asian respondents are becoming more optimistic about AI’s potential benefits. As industry participants understand AI models better, they see use cases in action, and they become more convinced by the competitive advantages and benefits to customers that this may offer.

Large investments have been made in developing DLT solutions for the financial services industry during the past five or six years and this is now translating into live applications designed to bring additional security and efficiency to transaction processing, including trade order routing, settlement and record-keeping, as well as the development of entirely new business models. Distributed ledger-based technology, applying secure, permissioned blockchain, enables stakeholders to a transaction to access a real-time view of each transaction and to agree the terms of transaction settlement working from a single, accurate set of records.

On settlement, change of ownership is adjusted automatically on the register, delivering a common book of record across trade participants that is updated in real-time. Because settlement parties have a common view of the settlement terms on blockchain, this dramatically simplifies reconciliation requirements across participants. By making this common record accessible to financial supervisors, this can also strengthen regulatory oversight and streamline the task of regulatory and compliance reporting.

In line with this commitment, the importance attached to regulatory technology continues to rise, climbing from 15% in the 2018 survey to 24% this year. We should note that these technology categories are not mutually exclusive, with DLT and AI applications (for example, to drive natural language processing applications for documentation analysis, see box, previous page) finding growing use in regtech solutions. 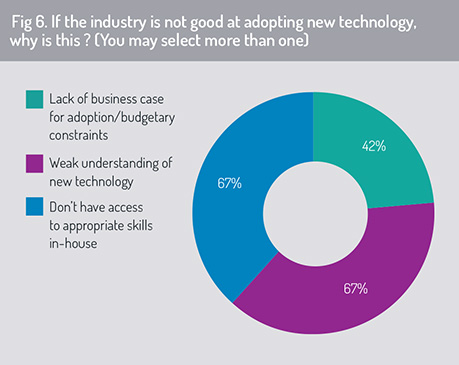 We asked those respondents who do not believe the industry is good at technology adoption to provide further information from a list of options. Roughly two-thirds said that the funds industry does not have access to the appropriate skills in-house to manage technology transformation effectively (fig 6). A similar percentage told us that the industry has a weak understanding of new technology. A smaller section of respondents (42%) believed that implementation of new technology is constrained by lack of budget or by the lack of a suitable business case for adoption. 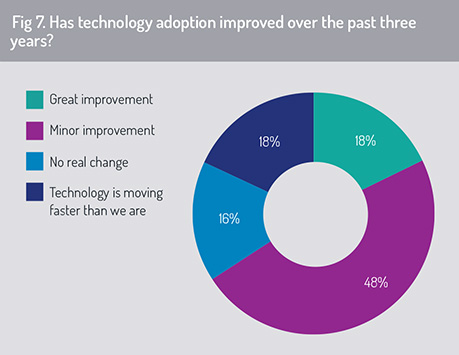 In the next question, we asked whether the adoption of new technology has improved across the asset management industry over the past three years (fig 7). More than two-thirds of respondents told us that technology implementation has improved over this period, with 18% of this group believing that there has been a strong improvement. By contrast, only 18% said that the funds industry is failing to keep pace with new developments in technology. These results align with the findings of the year-on-year comparisons represented in figure 5. This provides evidence that the funds industry is embracing change and is sharpening its expertise when it comes to putting into practice opportunities created by new technology.

However, respondents indicated that in some organisations, decision-makers still exhibit a lack of understanding in relation to how new technologies will deliver commercial advantage and bring added value to customers.

To assess the funds industry’s investment priorities for technology development, we asked respondents to provide a ranking of where they will be committing investment resources – whether in front, middle or back-office functions, in website and mobile app development, or in regulatory and compliance technology (fig 8).

The responses are presented in order of weighted-average ranking, with the highest-ranked at the top. Responses indicated that front-office systems (for example, data-oriented distribution systems) were the highest priority in technology budget allocation, closely followed by back-office solutions such as investment in trade settlement systems.

Some respondents attached high importance to investment in regulatory and compliance technology (25% deemed this their highest priority) and to web or mobile app development (18% did so). However, these responses were both ranked below investment in front-office, back-office and middle-office applications on a weighted-average basis.

Looking at new technology affecting the funds industry, we asked where the major sources of innovation would come from (fig 9, previous page). 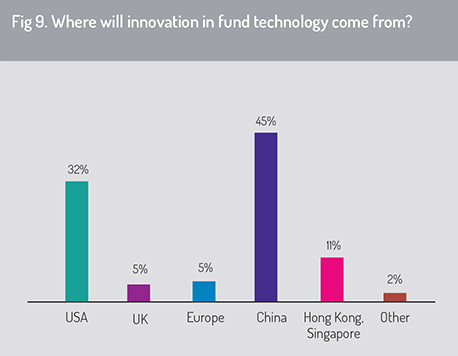 Some 45% of respondents indicated that China, the world’s second-largest economy, will be the major contributor of technology innovation to Asia’s funds industry. The US, a long-term investor in research and innovation, was the second-most popular answer (32%). Two Asian city-states, Hong Kong and Singapore, are expected to account collectively for a further 11%. Our participants believed that other world economies taken together would account for less than 12% of new developments in fund technology – an interesting statement, given the plethora of innovation hubs and fintech labs that have grown up in Europe and the UK.

From this evidence, it appears that many Asian respondents are looking within the region, particularly to China, as a primary source of technology development. Few of those we asked believe that these European locations can keep pace with fund technology advances coming out of Asia or he US.