The next section has been included in the survey for the past two years. This analyses which companies will be the most valuable partners to asset management firms in managing business innovation and which will be the primary sources of disruption within the funds industry (fig 10).

This year, online retailers (such as Amazon and Alibaba) and fund platforms (such as Allfunds and UBS) appeared at the top of the rankings. This represents a change from the 2018 survey, when technology companies such as Google and Microsoft were perceived to be the most useful potential partners to asset management companies.

‘BigTech’ companies such as Google have established strategic partnerships in the financial services industry (with selected asset management software vendors, suppliers of asset servicing and payments technology, for example) to understand this industry sector better and to refine their research and product development to meet the specialised needs of financial services firms. However, it remains to be seen whether these BigTech firms will remain partners to such companies or, ultimately, become competitors through developing their own solutions in these areas.

In the next question, we asked which types of company are most likely to disrupt asset managers’ business models (fig 11). In line with our analysis above, respondents believed that technology companies such as Google and Microsoft are most likely to become disruptors, even though they perform an important role as potential partners at present. 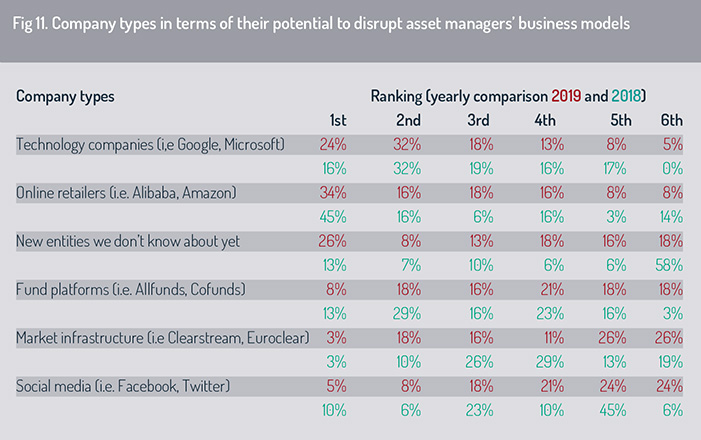 Online retailers such as Alibaba and Amazon also feature highly as potential disruptors – a result that aligns with findings from the 2017 and 2018 surveys. These companies have extensive commercial reach in Asia through their online marketing platforms for goods and services. Over time, it may be a relatively short step to extend their distribution, supply chain management, IT solutions and business services expertise into the investment funds industry.

Distribution channels
In this section, we evaluate how the distribution channels that asset managers are using to sell their fund products in Asian markets are evolving over time. We asked respondents to rank the importance of key distribution channels in their country or region (fig 12). Bank distribution was rated the most important channel this year, just as it was in the 2017 and 2018 surveys. Inevitably, this response is heavily driven by the location of survey participants – and bank distribution accounts for a major share of fund sales in Hong Kong, Singapore and Taiwan, which collectively account for more than 80% of our respondents. 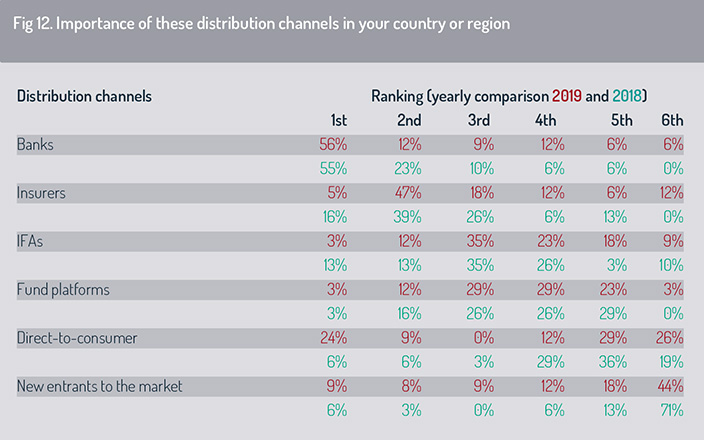 Insurers and IFAs were ranked second and third respectively, each moving up one place from last year’s survey. In contrast, fund platforms slipped to fourth in this year’s weighted rankings, falling from second last year. This indicates a pause in the gradually expanding footprint that online distribution via fund platforms has been building in certain Asian markets (Singapore, China and India, for example).

It seems that respondents believe this interruption will be temporary, however. In the next question, we asked survey participants to predict which distribution channels will be most important in their market or region in five years’ time (fig 13). Respondents believed that fund platforms will be the dominant sales channel by the mid-2020s, narrowly surpassing bank channels as a distribution medium. This may reflect the importance of online distribution in the Chinese market, and the efforts of regulators in some Asian markets (e.g. India) to promote online funds as a low-cost way of encouraging saving for the future.

Respondents predict diversification of the distribution marketplace in Asia, with new entrants stepping into this arena to compete with established marketing channels. A small group of respondents believe that direct-to-customer channels have an important role to play in future distribution. However, this is likely to be an option available principally to large asset managers with well-established fund ranges. As we have argued previously, this D2C approach is likely to be difficult to sustain for smaller fund houses that lack strong brand recognition. 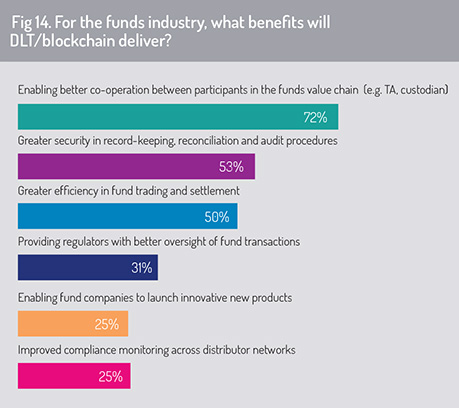 Distributed ledger
In commenting on figure 4, we outlined potential benefits that distributed ledger (blockchain) technology may deliver to asset managers and their investors. In the next question (fig 14), we asked survey constituents to tell us which potential benefits of DLT will be most important for the funds industry (they were permitted to select more than one answer). Almost three-quarters of respondents said that the most important benefit will be to encourage better co-operation between participants in the funds value chain (for example, fund custodian, transfer agent). More than half indicated that DLT will bring greater security to record-keeping, reconciliation and audit procedures – and 50% said that this technology will bring a general improvement in efficiency in fund trading and settlement.

One quarter of respondents believed that blockchain will deliver advantages from a product development standpoint, enabling fund companies to release innovative new products.

We moved on to assess where DLT will deliver most benefit to funds investors (fig 15). Survey respondents identified a mixture of cost savings and risk reduction to be the most important outcomes. The dominant response was that this will deliver lower transaction fees (44%). A further 16% of respondents believed that the most significant benefit would be a reduction in risk through record-keeping errors. A comparable percentage believed that DLT will deliver benefits in product development by facilitating the development of new investment solutions. 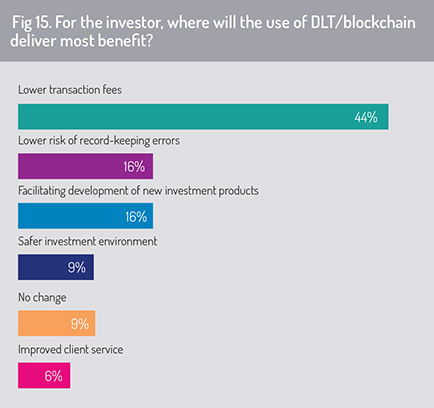 It is noteworthy that only 9% of respondents said that the use of DLT will deliver no obvious benefit to the investor. Many survey participants clearly believe that DLT has an important role to play in the future of the investment funds industry and has potential to deliver valuable benefits to asset managers, service providers and the investors that they serve.

We will monitor with interest how responses to these questions evolve in the coming 12-24 months. DLT technology has been discussed at a conceptual level for several years and decision-makers within companies have been asked to make choices around whether investment in DLT projects will justify the potential advantages that this technology may deliver.

Now, with the launch of major distributed ledger-based projects, asset managers and their distribution partners have the opportunity to employ DLT to support their fund trading, settlement, record-keeping and additional new business models. Industry participants will now be in a better position to evaluate DLT technology on the basis of concrete-use cases and day-to-day performance.