When we asked our Asia-based respondents which technologies will have the biggest impact on the funds business, they told us (as they did in the 2019 Asia survey) that distributed ledger technology (DLT) will be most important. The ability to manage ‘big data’ and to harness new innovation made possible through artificial intelligence applications will also be key to Asia’s growth (fig 5). 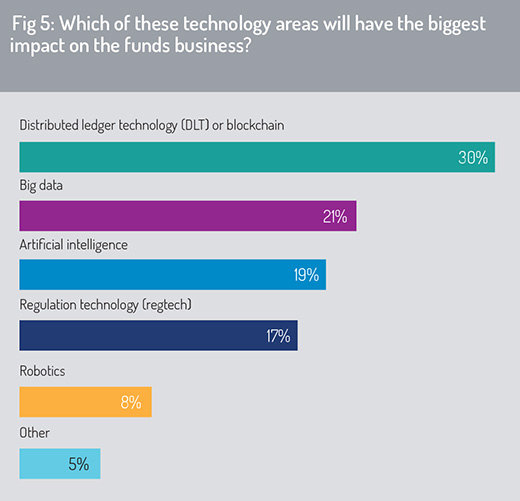 This result contrasts with findings from the 2020 Europe and UK survey, where respondents indicated that artificial intelligence technology will have the greatest impact on the asset management industry. For the first time in the four years that this survey has run, distributed ledger technology was displaced from its top position.

Adam Belding, Calastone’s chief technology officer, believes this is a situation where, in Gartner’s “hype cycle” model, blockchain technology is passing through a “trough of disillusionment”. In this phase, blockchain technologies have not yet fulfilled the hype they have received and a number of blockchain enterprise technology projects are still in experimentation mode (for further details, see Bob Currie’s article ‘Tech will democratise wealth management’, Funds Europe, May 2020, pages 40-45; this can also be found on the Funds Europe website).

However, on surviving this trough, Gartner’s model (which provides graphical representation of the maturity of new technologies and their rate of adoption, fig 6), predicts that the transformational impact of DLT will again rise as it matures as an enterprise technology and a broader range of business cases support its application.

In Asia, respondents retain higher confidence in the potential offered by DLT. The percentage of respondents who believe DLT/blockchain will have greatest impact on the future of the asset management business has climbed slightly, from 29% in 2019 to 30% in 2020, and there is no obvious “trough of disillusionment” visible in the road ahead for Asia’s blockchain initiatives. 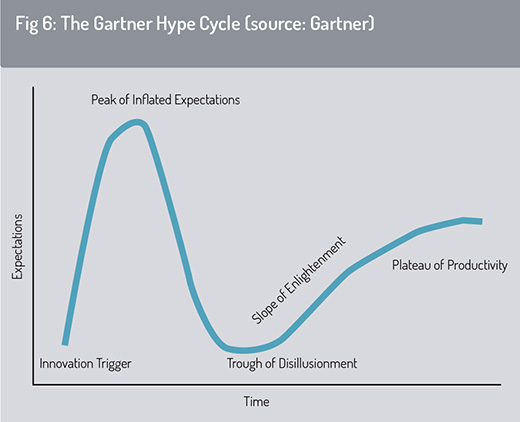 Quite the opposite, in fact. We see the continued release of DLT-based projects in Asia designed to harness this technology for the advance of the digital economy. In April 2020, China launched a national blockchain infrastructure, known as Blockchain Service Network (BSN), designed to facilitate development of blockchain applications at an affordable cost. Built through a collaboration between state-owned firms China Mobile and China UnionPay, along with cryptocurrency exchange Huobi China, BSN was released for beta testing in October 2019 and forms part of a wider programme in China to “accelerate the growth of smart cities and the digital economy”, according to a public statement by the network.

Since its launch, BSN’s group of participating firms has continued to grow, with China Unicom, China Telecom and People’s Daily recently joining the alliance.

The use of big data ranked second in the Asia survey – and this factor underpins the effective operation of all other technology referenced in this report. The ability to manage large data volumes and high data velocity is fundamental to a wide range of functions in asset management, from constructing high-performing investment strategies, feeding performance analytics and attribution tools, to driving efficiency in trading, clearing and collateral management. Sound data management is also fundamental to enabling efficient distribution strategies, regulatory and client reporting. However, responses from the Asia survey are also more polarised than they were last year. Some 35% said they disagreed that the industry was good at technology adoption, a rise of 11 percentage points on last year’s figure.

Distributed ledger technology
When asked which benefits of DLT will be most important for the asset management industry, the survey found that “greater efficiency in fund trading and settlement” will be the dominant benefit (fig 8). Respondents indicate that application of DLT will drive reconfiguration along the investment funds value chain, with financial intermediaries (e.g. transfer agents, fund custodians) potentially being ‘disintermediated’ from the transaction value chain as record-keeping is centralised on distributed ledger.

The survey also finds that adoption of DLT will enable better cooperation between participants in the investment funds transaction lifecycle (44%), enabling participants to share access to a common book of record which can be updated in near-to-real time. This reduces the cost of data reconciliation and enhances the efficiency of regulatory oversight and audit. Respondents also highlight the potential for DLT to deliver greater security in record-keeping (37%).

Focusing on where DLT will deliver most benefit to the investor (fig 9), the survey finds, like last year, that the principal benefit will be delivered through lower transaction fees (32%, down from 44% in 2019). 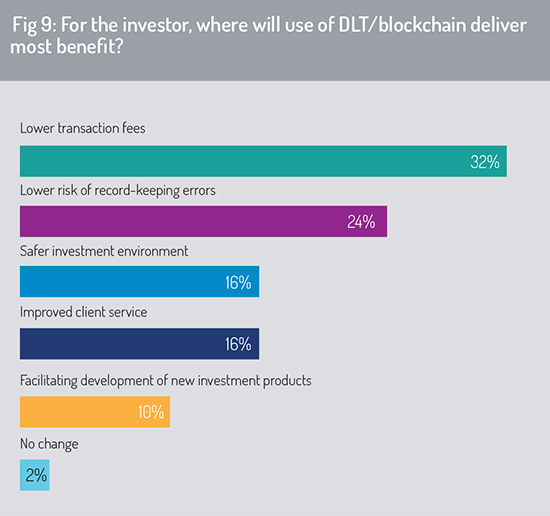 It will also deliver a lower risk of record-keeping errors (24%, up from 16% in 2019) and a safer investment environment.

In keeping with the findings of last year’s Asia survey (and the results of the 2019 and 2020 Europe and UK surveys), respondents appear to value the cost-efficiency benefits of DLT above the risk-management benefits (through a safer investment environment, lower risk of record-keeping errors) or potential improvements in client service.

Again, few respondents highlighted the potential for DLT to deliver greater creativity in the development of new investment products. We are watching this with interest, given the potential for asset management companies to create fund units through ‘tokenised’ issuance on blockchain. This will allow fund promoters to structure new investment products and, potentially, to offer improved trading liquidity by ‘fractionalising’ illiquid assets into smaller denominations that trade as tokens on blockchain.