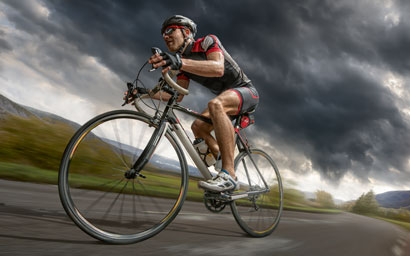 Investment management has a lot to learn from the sporting world. One Olympic coach is already active in helping fund managers sharpen their game, as Alix Robertson reports.

Sir Bradley WigginS, winner of seven Olympic cycling medals for Great Britain, understands that analysing his behaviour will help him excel. On becoming the first British winner of Switzerland’s Tour de Romandie in 2012 – despite dropping his bike chain as he began the climb to the summit finish – he highlighted the importance of his behavioural training in an interview with the BBC. “I’m pleased with the way I handled that moment because a few years ago, I might have thrown my toys out of the pram and chucked my bike down the ravine,” he said. “It was a good test for the bigger races coming up and I’m delighted.”

A CHANGE OF SCENE
Wiggins is just one of the apprentices coached by Shane Sutton, technical director of British Cycling, whose focus is on highlighting key changes that athletes can make to improve their long-term goals.

Sutton has a strong pool of pupils, with 26 Olympic cycling medals to his name. However, his latest challenges take place in the world of asset management, where learning not to throw your toys out of the pram has its own particular benefits.

As with cycling, Sutton says that coaching fund managers to stay focused and objective in high-pressure situations is key. “I help talk the managers through how to achieve this and we’ve had some great success in helping them master their emotions.”

Sutton is currently working in partnership with Inalytics, a software and consulting company that gathers data about the activity of fund managers and uses behavioural analysis to help them improve their work.

“We didn’t start out as behavioural finance specialists,” says Inalytics’ chief executive and founder, Rick Di Mascio. The company began with a focus on data, but when it came to making sense of its findings, the solution lay in behavioural finance.

Di Mascio says the asset management industry has only just come round to the idea that analysing data and behavioural patterns to improve performance makes sense.

“Attitudes definitely changed in the fund management industry last year - it’s about using data intelligently to learn from it,” he adds.

Even though Inalytics was able to provide fund managers with the information they needed, in its early days the firm struggled to get them to focus on making changes. That’s where the work with Shane Sutton began.

“We thought, ‘Somebody somewhere must have worked this out’, and then of course we realised that the world of sport had sorted it out 20 or 30 years ago.”

Now in its 18th year, Inalytics has a database of about 940 portfolios from around the world and has close to 50 clients.

Applying approaches drawn from sports coaching was a logical step for the company. “No elite athlete in any field would be expected to compete without a thorough analysis of their game, the identification of their strengths and weaknesses and a coaching programme that works on them to get the desired improvements,” says Di Mascio.

GETTING ACTIVE
Di Mascio says that one thing is certain from Inalytics’ research. “What we find is that fund managers are undoubtedly skillful,” he says.

His certainty could have far-reaching consequences in terms of the active/passive debate in asset management, which questions the merits of cheaper, passively managed funds against their more expensive, actively managed counterparts.

Di Mascio says research such as that carried out by Inalytics could have the potential to change the outlook for active managers, who have had a tough time in the face of recent statistics that show many struggling to beat their benchmarks time and again.

“All this talk about ‘fund managers can’t justify their existence’, we don’t see that. We see these fund managers as being really good,” Di Mascio says. “But notwithstanding that, they’re human beings like everyone else and are good at some things and bad at others.”

He acknowledges that the Inalytics database is dominated by fund managers from “the competitive end”, but says it is very rare to see any evidence of the ‘benchmark hugging’ for which active managers are sometimes criticised. “If anything, it’s the opposite extreme – we see 15-stock portfolios!”

Di Mascio adds that while it is “undoubtedly true” that the majority of fund managers are capable of distinguishing winning stocks, many have trouble carrying this performance through to create a good return.

“The industry is made up of well-educated, well-connected, well-resourced, intelligent people who by and large are very good at finding winners,” he says. “But instead of doing what people should do, which is to run a winner, they cut it way too early.”

He adds that holding on to the ‘losers’ for too long can also be a problem. “People are not great at admitting mistakes in any walk of life, and fund management is absolutely no different.”

Overall, Di Mascio compares performance to “a leaky bucket”. While good ideas may be pouring in at the top, holes in the bottom – the leakage from poor selling – can mean that performance deteriorates as time goes on.

Inalytics combines statistical evidence and behavioural coaching to help fund managers to seal gaps in their investment strategy, but also enables them to provide clients with an explanation of successes, weaknesses and plans for improvement.

In Di Mascio’s opinion, this has been missing from asset management. “I think central to the point about the active/passive debate is that in other industries, a provider will provide proof statements … In fund management, it relies on, ‘Trust me I’m a fund manager, and here’s a track record to prove it.’”

Making changes to improve performance is important, but keeping clients informed is vital if active managers want to rebuild trust in their skills.

COURAGE OF THEIR CONVICTIONS
Clare Flynn Levy is founder and chief executive officer of Essentia Analytics, a firm that has developed decision support software designed to help fund managers improve their investment behaviour.

Levy also sees potential here for a positive impact on the active/passive debate. “The only reason that passive has become so successful is that active managers are not trying hard enough, and I say that having been one,” she says. “Of course they are working very hard, but they’re not being precise. They need to behave more like athletes, where they measure exactly what is working and what is not working and then iterate on their process.”

She adds that it is important for fund managers to know what is affecting their decision-making, but also to have a solid base of evidence to give them conviction when it comes to making tough decisions.

“It’s not comfortable to [go against the crowd] and you have to be able to give yourself permission,” she says. “The easiest way to do that is to look at data that proves to you, ‘I need to stick with my convictions on this.’”

ROOM FOR IMPROVEMENT
While the potential of behavioural analysis in asset management is becoming clearer, some aspects are still up for debate.

Janet Larsen, a behavioural psychologist at investment consultancy firm Stamford Associates, has worked extensively on analysing fund managers’ behaviour. Although she believes these techniques have an important place in investment management, she also sees areas for improvement.

Larsen questions, for example, the approach to sales discipline that groups such as Inalytics employ, and stresses that good strategy does not always guarantee good results.

“They are doing a lot of work at the moment about successful sells,” she says, ”but it’s also a question of separating outcome from process.”

Larsen asks whether a manager who completes careful research, constructs a strategy, sticks to it diligently but does not achieve the results hoped for can really be said to have made a mistake.

“[A manager] could have made all the measurements he liked and decided what the intrinsic value of a company is and the rest of the market just never gets it, because they’re all paying attention to something else. He might be absolutely right about what he’s actually doing ... but he’s at the mercy of the rest of the market to recognise that as well.”

She adds that diverting from a plan of action in order to ‘run a winner’ could be considered bad investment behaviour. For the fund managers that Stamford Associates works with, not selling at the estimated intrinsic value is the equivalent of “investing without a parachute”, a risky business that undermines the research you did in the first place.

CONSTANT FLUX
Funds managers may approach the use of behavioural finance techniques in different ways and with different boundaries, but it is hard to envisage how understanding their own strengths and weaknesses in more detail could have a negative impact.

Gianluca Monaco, partner at Ardevora Asset Management, sums up the reality in writing about behavioural finance: “While the world is in a constant state of flux, there remains one unfortunate constant: the human capacity to make mistakes.”

No fund manager can promise to get it right every time, so surely it makes sense for them to learn from their own mistakes, get back on the proverbial bike and rejoin the race.