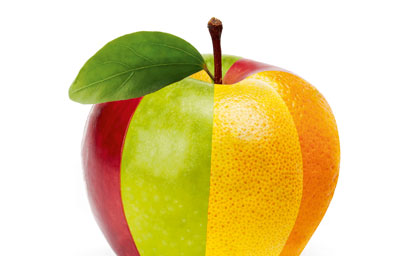 THE next stage of development in the smart beta world is underway, with investors looking to combine investment factors – such as low volatility, value, and momentum – into their portfolios.

The combination of smart betas, or risk factors (the terminology is confused, see box), is an idea aimed at investors who are looking for cheap alpha.

Smart beta combination, depending on how it’s implemented, could be a truly passive buy-and-hold strategy or more active in flavour, resembling an asset allocation process that requires consideration about which factor exposures are suitable for a given market environment.

Rolf Agather, FTSE Russell’s managing director of research, North America, says: “The clear trend we are seeing is not only continued interest in adoption but also people starting to think about combinations of strategies.”

But there is a challenge with multi-factor adoption. What happens when a market cycle suddenly turns and results in two smart beta factors, such as volatility and value, correlating? The portfolio’s diversification qualities would disappear.

“It’s going to be difficult from an asset allocation perspective to invest in a variety of smart beta,” says Brown, though she points out the challenge of strategy overlap leading to lost diversification is a problem investors have always faced in traditional active investment.

“Potentially, value and momentum have a low correlation,” adds Agather, “so there is an opportunity that by combining them, you get a diversification benefit which you might not get simply by investing in the broad market.

“But you have to be careful because, over the long term and through multiple market cycles, there may be short periods of time when value and momentum, say, don’t necessarily behave in an opposite manner.”

How to determine the best smart beta strategy (or combination of strategies) for their portfolio was the most common concern for respondents in a FTSE Russell smart beta survey published
in May.

A PRECEDENT
For investors trying to understand how to combine investment factors, there is a precedent. The idea of combining factors is not as new as it seems, and this is where the history of the quants comes in.

“The concept of taking a  series of factors and combining them in a portfolio is what quant managers have done for 25 years,” says Brown.

Fund managers with traditional cap-weighted passive products have jumped into the smart beta business. UBS Global Asset Management is an example of one of these - running passive equity mandates for more than 30 years, it launched a smart beta business back in 2010. 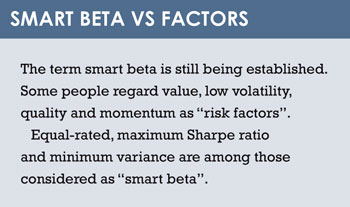 However, fund managers with quant tools are also on the smart beta production line now, as there is a close relationship between the two approaches. For example, Candriam, the Paris-based manager formerly called Dexia Asset Management, offers smart beta and quant.

Its chief executive, Naïm Abou-Jaoudé, told Funds Europe (September 2015), that: “Smart beta is partly quant and partly optimisation … We do things where there are synergies and quant can work a lot with smart beta.”

Brown, at Axioma, says: “There’s a fine line between quant and smart beta, a fuzzy distinction between these products, but I think it’s perfectly fair enough to combine the practices.

“The process of being disciplined about what you buy and sell and using data to get to your conclusions and to your understanding of risk, this has not changed. What you’re calling it has changed.”

The quants also offer a dramatic precedent in how market swings can lead correlation to bite all of a sudden.

This came in mid-2007 and lasted until 2009. Many quant funds had overlapping portfolios due to common metrics for value and momentum. They correlated at a time of market stress and were unable to exit positions.

“Quant models worked well for many years but got a black eye in 2007,” says Brown.

“The problem with quants [in that period],” says Agather, “was that they were all potentially getting more exposure to a particular factor that became a crowded trade and didn’t pay off.”

This is where smart beta, which is passive in nature, reveals its active side if investors seek to choose when a certain beta, or risk factor, is appropriate to invest in. It becomes an active asset allocation decision.

In its general education around smart beta, Agather says FTSE Russell tries to stay away from the notion of market timing.

“[Timing the markets] can be very difficult for the average investor, who would have to pick when value or momentum might outperform the broad market, or to pick when correlations are low and getting them the diversification benefits.

“Very complex models are needed to do that effectively.”

There are definitely periods when factors move together, Agather says, but they may not do over the longer term. And 2007 was an extreme period, after all.

“It’s important for investors to think about the longer term and our survey asked about that. Fortunately, the majority of respondents think of smart beta as strategic and something to hold for longer than three years and potentially longer than five years.”

Axioma is in the business of using analytics to help investors identify optimal weightings for portfolios, including smart beta, and where portfolios overlap. A related problem for investors is when one strategy sells a stock that another strategy buys, meaning the investor could double up on trading costs if smart betas were employed from independent providers and run in a disjointed manner.

Eric Shirbini, global product specialist at ERI Scientific Beta, the smart beta index venture of the Edhec-Risk Institute, says investors like Amundi invest in its combined index only after all the trades have been netted out.

“If one of the smart beta indices is selling the same stock as another smart beta is buying in exactly the same proportion, then there is no trade at the composite index level and therefore no trading cost for the investor.”

He says that compared to a multi-beta fund that manages the individual smart beta strategies separately, netting saves an investor 5% to 7% in “one-way turnover” per year.

He adds that the lower trading cost, combined with the lower risk of diversifying across smart factors indices that are not perfectly correlated to each other, are the two main reasons why investors are better off using this blended approach.