London-based investors were recently granted the right to use their offshore renminbi and invest it into China under its renminbi qualified foreign institutional investor programme. Stefanie Eschenbacher finds Asian asset managers are exploring the possibilities to list their exchange-traded funds in Europe as Ucits.

Could the next hot investment destination in Asia be London?

In October, China granted London-based investors the right to use their offshore renminbi and invest into China under its renminbi qualified foreign institutional investor (RQFII) programme.

With an initial quota of 80 billion renminbi (€9.6 billion), London is the first financial hub outside the Greater China region to participate in the RQFII programme.

The UK’s capital could also become the first location outside the Greater China region to list RQFII ETFs.

These RQFII ETFs are renminbi-denominated physical A-shares and were initially the exclusive domain of a handful of Hong Kong-domiciled subsidiaries of Chinese asset managers.
In Hong Kong’s asset management circle, the programme is often colloquially called a “gift” from the regulator.

Having launched two RQFII ETFs in Hong Kong, Peng Wah Choy, chief executive officer of Harvest Global Investments, says he now looking to London. “It is not about the location but about the regulatory environment,” Choy says. “We are keen to explore the possibility to launch RQFII ETFs through the Ucits directive.”

This would allow asset managers like Harvest Global Investments to sell their RQFII ETFs not only in Europe but back into Asia using the passport.

When the RQFII scheme was first launched, only Hong Kong-based subsidiaries of Chinese asset managers were able to participate.

Should the regulators adopt a similar approach in Europe, only UK-based asset managers would be able to apply for a license and a quota.

At best, he says, this would be a sub-advisory agreement. And he notes that within ETFs, there less need for a sub-advisor than for actively managed funds because it does not involve stock picking.

Though, he adds, that the situation would be different if a Hong Kong quota would become portable.

“We are exploring how we can go to London because we see a lot of demand not only for China onshore securities but for renminbi-related investments in general.”

In the end, Wang says, they did not invest because there were investment restrictions and compliance issues.

“Now that the RQFII programme has come to London, we think the regulators [in Europe] will be more comfortable with it,” he says, adding that they will be in a better position to approve RQFII ETFs within the Ucits framework.

The RQFII programme is also considered superior to the qualified foreign institutional investor programme, where liquidity has been a problem.

Jackie Choy, ETF strategist for Morningstar, says even though London already has a large number of ETFs, these RQFII ETFs could be an interesting option for investors.

Hong Kong saw the listing of the eight RQFII ETF in September.

Asset managers have continued to launch these products, even though investor interest has cooled since the programme launched a little over a year ago.

In September, net outflows totalled 454 million renminbi. These figures do not take into account the net inflows of the newly listed ETFs on the first day of trading, respectively.

However, investors may be warming towards RQFII ETFs. The pace of outflows has slowed in recent weeks.

“The market was not performing in the first months of this year, but the delay to tapering has probably driven some money back into emerging markets,” Choy says.

Data from Morningstar says most new ETFs in Asia have been listed in China, though Choy says this is not necessarily because China is the most compelling investment case.

“China is in the early stages of development,” he says. “Before this year, there were only China equity ETFs, now there are several sector ETFs and even a gold ETF.”

Home bias is another reason for investors to buy these products. Choy at Morningstar says some 70% of assets are invested in Hong Kong or Greater China equities.

Another driver for China-related investments could be the fact that in June MSCI has initiated the review of China’s A-shares market for potential inclusion into its MSCI Emerging Markets index.

MSCI REVIEW
Chin Ping Chia, managing director at MSCI, says MSCI has $7 trillion benchmarked to it worldwide, $1.4 trillion of that to its MSCI Emerging Market Index. China currently accounts for 19.7% in the latter, but those are mostly H-shares listed in Hong Kong.

The country’s weight could rise to as much as 30% in the MSCI Emerging Market Index, which would trigger a significant demand for China-related investments from passive investors and index huggers. 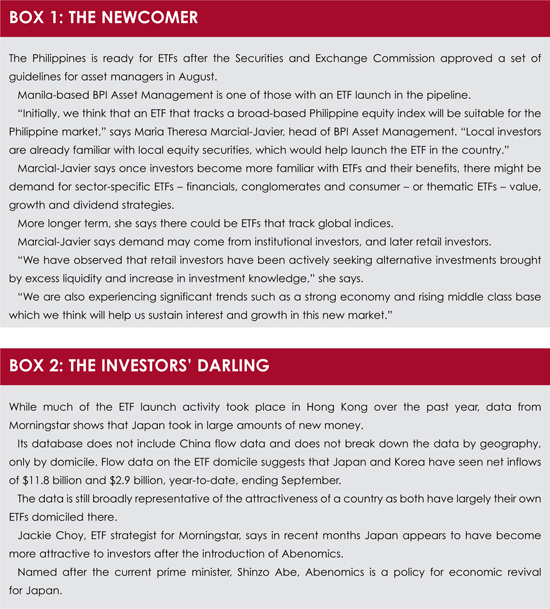 Institutional investors also use MSCI indices as reference benchmarks for their portfolio. “They could overweight or underweigh it, or, if it is a small country, they might not make an allocation at all,” Chia says.

“That would trigger substantial rebalancing… from investors, if China is part of their benchmark,” he says.

Mirae Asset Global Investments, the asset management arm of Seoul-based Mirae Asset, was among those that have launched China-related ETFs in the past year, though it has focused on Hong Kong-listed H-shares.

Although Lui says that there are already many ETFs in Hong Kong that track the performance of the Chinese market, they have seen larger inflows.

BEYOND CHINA
Customised and sector-focused ETFs, on the other hand, have been less popular, she adds.

“In Asia, unlike in mature markets such as the US and Europe, we do not have a lot of ETF solution providers so flows are more directed towards vanilla and single country-type products,” Lui says. 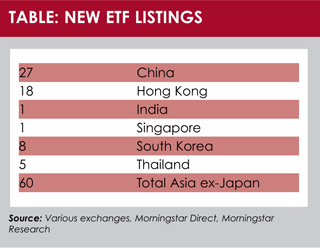 Though this might change as new exchanges are opening up towards ETFs, most recently the Philippines (see box 1).

“We have been meeting with various exchanges in the region… and they are keen to introduce ETF products for liquidity reasons and to increase the variety of choice.”

Mirae Asset Global Investments, she says, is exploring the possibility to cross-list products in countries of the Association of Southeast Asian Nations, such as Singapore, Malaysia and Thailand.

Hong Kong and China have been the fastest growing markets (see table), albeit growth is coming from a low base. Regulators have still not given the green light for leveraged ETFs, which have been particularly popular in places like Korea.

Data from Morningstar shows that Korea, along with Japan (see box 2), have seen the largest inflows over the past years.