Their home market has an exceptional potential for growth, but Asian asset managers are increasingly looking to Europe. Stefanie Eschenbacher finds they encounter high costs and investors that like to stick to familiar brands.

Asian asset managers looking to expand in Europe face high costs setting up and running a Ucits strategy, and often end up promoting a brand unknown to European investors.

European investors typically shun funds that have not at least a three-year track record and a rating from one of the established ratings agencies – more so if they are not familiar with the brand.

Setting up and running Ucits funds tends to be significantly more expensive than setting up funds in their home market, something that asset managers can only set off against higher inflows.

“This is very challenging for managers,” says Jack Wang, managing director, institutional client group, at CSOP Asset Management. He says the situation is almost like saying “no income but only cost for three years”.

CSOP Asset Management was one of several Chinese asset managers that recently launched an umbrella structure in Europe, with two sub-funds focusing on Greater China equity and fixed income.

In addition, Wang says his team is exploring new opportunities in Europe, and expansion into passive investment or hedge funds.

He says the main reason was that it wanted to set its “footprint in Europe” by providing investment expertise in China.

Wang says Europe is an important part of the global expansion strategy out of Hong Kong and China. Although Ucits has relatively higher maintenance costs and more regulatory requirements, he says it is widely recognised, and trusted. The recognition of Ucits has also reduced his due diligence costs, he adds.

“We tried to sell the fund ever since the fund was launched,” he says, noting that the assets started to grow faster once they had a two-year track record.

“We are about to reach the three-year track record for our fund and the very good performance will definitely help us to grow assets under management further.”

Wang says the growth of assets under management is key to bringing down costs, which is why CSOP Asset Management is seeking partners in Europe.

Despite the drawbacks, Ucits was a natural choice for the Chinese asset manager.

“We like the strict risk management standard and diversification rules, and we think it is a good combination with emerging market exposure,” he adds.

UTI International set up two funds in Dublin, one under its own brand and one on a managed account platform.

Jagwani says not only is the Ucits structure more expensive to set up, but he also draws attention to the ongoing costs that occur.

REST OF THE WORLD
A Singapore fund, however, can only be sold in Singapore. Jagwani adds that it is still cheaper to set up one Ucits fund and then distribute it through the passport than to set up funds in different countries.

“Today, we have clients in Japan, Qatar, the United Arab Emirates and Kuwait,” he says.

Ucits is not only about selling into Europe, but also into the rest of the world. Most offshore funds in Singapore, Hong Kong and Taiwan are Ucits funds.

“Just because it is Ucits, it does not mean we have to go retail,” he says. “We know we want to target the old money in Europe and the new money in Asia.”

Explaining his choice of domicile, Jagwani says Ireland had a more favourable tax treaty with India when it comes to fixed income. Luxembourg would have been expensive because it does not have such a tax treaty.

HEADWINDS
Over the past five months, the strategies have raised $50 million. 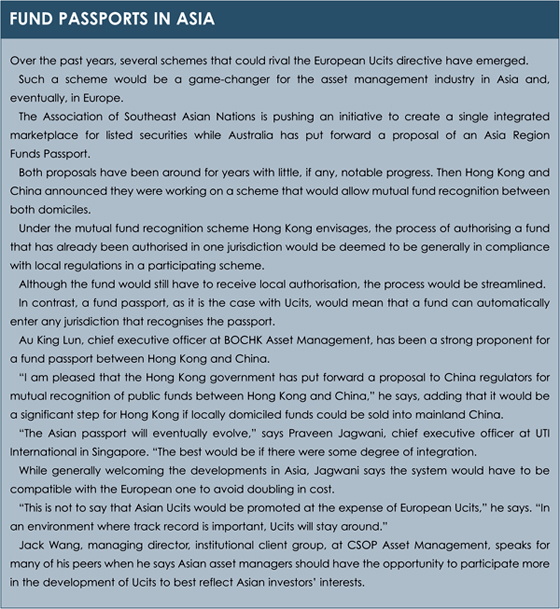 “We thought we would raise more, but it is a single-country fixed income fund investing in emerging markets, and was launched with headwinds,” he says. “We had a few months of good interest and, all of a sudden, emerging market bond funds were out of favour.”

Investors have generally become more risk averse, and there has been evidence of what has been dubbed the Great Rotation away from fixed income into equities.

Japanese asset managers have long set up funds, such as specialised investment funds, in Europe only to sell them back into Japan.

Yuichi Alex Takayama, who, at the time of the interview was chief executive officer at Tokio Marine Asset Management in London, says the head office in Japan had no intention at all to sell the funds into Europe when it established specialised investment funds in Luxembourg.

“These funds were originally designed for Japanese distribution,” he says. “Despite good performance, they were not popular when we later tried to promote them to European investors.”

Takayama, who has since relocated to Tokyo and been appointed head of global business development, says while Tokio Marine Asset Management is established in its home market, investors in Europe were unfamiliar with the brand.

“After launching Ucits funds, we got a positive feedback from investors,” he says, adding that Ucits has acted as “an endorsement” for his strategies.

COMPETITIVE ADVANTAGE
It launched two Ucits funds in Dublin, but says this choice was more driven by the availability of a Japanese fund administrator.

Being a Japanese asset manager, Takayama says he preferred to do business with a Japanese fund administrator, which was then the Daiwa Securities Group, but in December was sold to the Sumitomo Mitsui Trust Bank.

Others, such as HuaAn Asset Management, are also considering launching a fund investing in China’s onshore market through the renminbi qualified foreign institutional investor scheme.

This, however, will depend on a variety of factors. One of them is whether European regulators will allow a higher than the current 35% limit on Chinese A-shares.

Investing in Chinese A-shares, which is only possible with a quota, is where Chinese asset managers see their competitive advantage over their European peers.

They will, however, have to sell their expertise in the form of Ucits, if they want to target a broad and international investor base.

Not all asset managers are convinced of this type of expansion strategy, though.

Au King Lun, chief executive officer at BOCHK Asset Management, the asset manager of Bank of China (Hong Kong), says he would rather work closely with a few selected partners on an exclusive basis than trying to promote a non-brand to a wide investor base through Ucits.

Ucits, he adds, work well if the asset manager is already an established player that does not have to spend time and resources promoting the brand.

“It will take at least a year to make investors comfortable with a brand,” he says.

BOCHK Asset Management has a partnership with Alternative Investment Management Product, which will act as a distribution partner for the Middle East.

Au says this allows him to cover another area where demand for high-quality renminbi fixed income investment has been increasing. It already has partnerships with Fubon Asset Management in Taiwan and Sal.Oppenheim in Germany.

“We are also in discussions with potential partners in the Nordics region, where we would like to establish partnerships,” Au says.