Chinese state-owned companies are now encouraged to pay out at least a third of their profits in dividends, something that has caught the imagination of exchange-traded fund investors. Stefanie Eschenbacher explores the market.

The 1.3 billion-consumer myth in China has disappointed investors, giving further impetus for an investment style that favours income over growth.

Mirae Asset Global Investments (Hong Kong) offers the Hang Seng High Dividend Yield Index that tracks companies listed in Hong Kong, and Lui says investors are increasingly asking about other ETFs that would allow them to access Chinese A-shares more easily. Investors outside China need a licence and a quota to invest in A-shares listed in Shanghai and Shenzhen.

Many Chinese companies listed in Hong Kong are tracked by the Hang Seng High Dividend Yield Index, but Lui says there is an investment case for an index that specifically tracks Chinese companies that pay above-average dividends.

“Some of these names are already included in our index, but we do get asked by some investors whether we are going to launch more dividend-themed products,” she adds. “Certainly, we are interested in this.”

Theodore Niggli, head of the Asia Pacific index business at MSCI, says his team has had discussions with ETF providers, although there are no immediate plans for launches.

“If there were an ETF that would capture these companies that are paying more dividends in the China universe, it could be interesting,” Niggli says. “Making it more narrow and include only state-owned companies could be a good idea as an ETF, but investors may be exposed to something else.”

Investing in Chinese state-owned companies would add an additional layer of corporate governance risk to it, and this aspect could not only drive returns but also risk.

Niggli says investors would be better off investing in a broader index that only includes companies that pay above-average dividends, regardless of whether they are state-owned.

“There is interest from institutional investors in yield that was not there five or ten years ago,” he says. “Combined with the fact that these companies are now paying more dividends, [such an ETF] would make an interesting product idea.”

Srivastava says anything with an exposure to Chinese companies listed either in China or Hong Kong, with a tilt towards dividends, will be popular. “The market is there, the depth is there,” he says. “Over the next few months we should be able to get some interest in those indices.” However, Srivastava is sceptical of an ETF that exclusively tracks the performance of Chinese state-owned companies.

“Given that some of these markets in emerging Asia are smaller and the sample of dividend payers is not as big as regional or global emerging market names, it is probably not a good idea to get narrower country indices until we see the market getting bigger,” he adds.

Markit forecasts that aggregate dividends paid by companies in the FTSE China A50 index will grow 4.7% this financial year to 457.5 billion renminbi (€361.1billion). This compares to a growth rate of 21.4% in the previous year.

Maojun Ye, a dividend analyst, says banks are likely to account for 55.8% of the total payout, followed by oil and gas company distribution, which are forecast to account for 17.2%.

RENAISSANCE
Ye adds that even though total dividend growth is likely to be slower than in recent years, 43 out of the 50 companies in the FTSE China A50 index should raise their dividend payouts.

Matthew Arnold, head of institutional ETF sales, Europe, Middle East and Africa, at State Street Global Advisors, says it is debatable whether there has been a cultural shift to pay more dividends. Although Arnold says he has observed a renaissance of dividend investing, yields in Asia are still relatively low.

MSCI data shows that equities in the region have on average yielded 2.54% over the past decade, and 2.45% over the past year, although this varies significantly from country to country. About 87% of companies in Asia Pacific region, excluding Japan, have paid dividends over the past two years. The corresponding number for Chinese companies listed in Shanghai and Shenzhen is 74%, but Niggli says this is growing.

This compares to 2.06% and 2.05%, respectively, in North America. Equities in Europe have long been in the higher-yielding category, with an average yield of 3.48% over the past decade, and 3.26% over the past year.

ARISTOCRAT
To become a dividend “aristocrat” in the US, companies will have to have their dividends grown every year for at least two decades. This compares to just seven years for those in Asia.

China forms a significant part of this index, and Arnold adds that it is likely to be given a larger weight in the future.

“China will be catching up on the dividend theme,” says Jackie Choy, an ETF strategist at Morningstar. “The guideline by the exchange to encourage companies listed in Shanghai to pay out 30% of their profits in dividends could be a catalyst for the theme to play out.”

ETFs tracking companies that pay above-average dividends have been popular among investors, largely because they have delivered higher returns under the low interest rate environment and as investors have been seeking for yield.

Choy says many indices screen not necessarily for companies that pay above-average dividends, but for those that just pay sustainable dividends and grow them over the longer term.

“Investors have been searching for yield, as interest rates have come down and traditional yield and income generating asset classes do not generate as much yield as they used to,” Arnold adds. “There has been a cyclical demand for dividend paying stocks that is globally.”

Morningstar has recorded that ETFs that invest according to dividend criteria have attracted 94.7% of the flows in the Asia Pacific region, excluding Japan, over the past year, totalling
$432 million (€341.5 million).

Dividend investment is not new in the Asia Pacific region – the first ETFs launched in late 2006 were actually pursuing income. Choy adds that comparing long-term trends in the region is difficult, simply because the industry is still in a growth phase. Dividend investing tends to gain traction among investors as markets and the companies that operate there mature because they need less
for expansion.

The more mature sectors in the region are financials, especially in China, and telecommunication sectors. Less generous are consumer companies, long a favourite among growth investors betting on China’s 1.3 billion consumers. 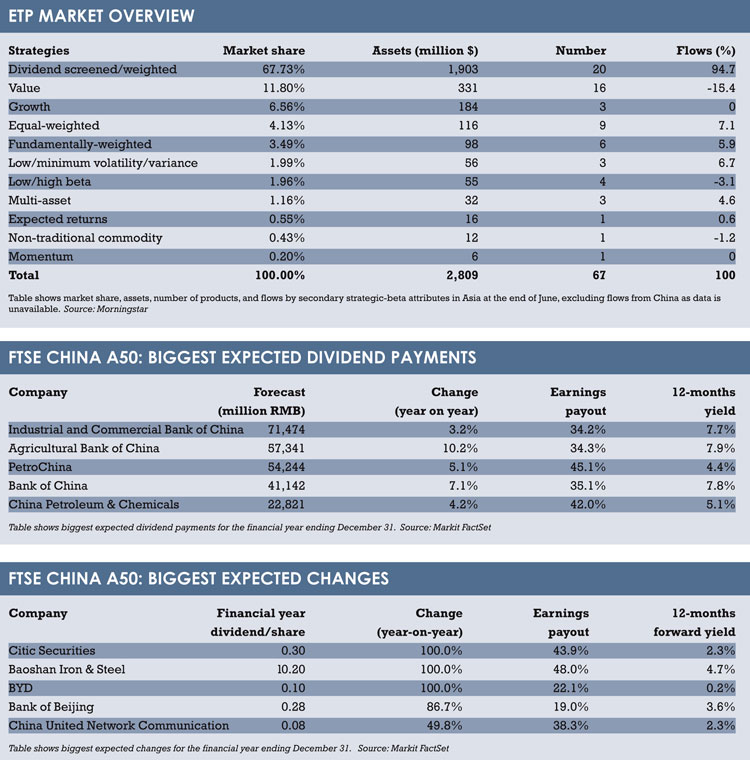