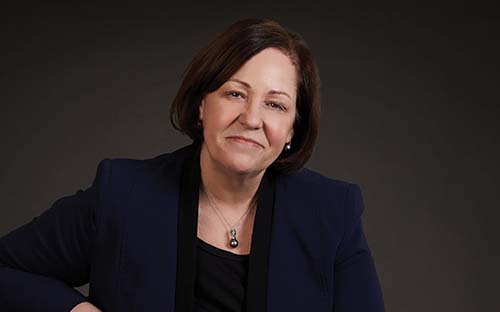 It’s mid-March and the number of folk in the streets has already begun to thin out noticeably. Inside Northern Trust’s tower in London’s Canary Wharf, many workers have begun working from home.

From the boardroom on the top floor of its Bank Street offices, Parker is confident Northern Trust’s contingency planning will steer the company through the uncertain days ahead.

Many of the firm’s trading staff that do work that cannot be done from home have already moved to an emergency back-up business continuity facility at a secret location north of London.

“By splitting our teams engaged in critical functions between our sites, we can make sure we reduce the chance of cross-infection with the virus,” says Parker. “We are on the same system around the globe, so we can move trading to Chicago, Australia or Hong Kong, where we have other locations.”

The Minnesota native – who mentions skiing, yoga and pilates as interests – took over as president of Northern Trust’s business in Europe, the Middle East and Africa (Emea) in 2017, following three years as the firm’s global chief operating officer for asset servicing and five years as head of Asia-Pacific.

As head of Emea, Parker manages Northern Trust’s business in nine countries, which accounts for around 800 clients and 3,500 employees (of a worldwide total of around 20,000 ).

The 59-year-old mother of two is a Northern Trust lifer, having spent 37 years working for the company in various posts in London and Singapore, as well as the firm’s Chicago headquarters.

Founded in 1889, the venerable firm has grown to become one of the largest custody banks and asset servicing companies in the world. At the end of 2019, it had US$1.2 trillion (€1.1 trillion) in assets under management and $12.1 trillion in assets under custody and administration (up from $7.8 trillion in 2015). The company does not disclose the size of its assets by region.

While Northern Trust is, in terms of assets, amongst the top ten fund administrators and custody banks in the world, it is nevertheless markedly smaller than some of its massive US competitors – which include JP Morgan, State Street and BNY Mellon.

With assets under custody/administration of $37.1 trillion and $1.9 trillion of assets under management, BNY Mellon is by far the world’s largest custodian bank and asset servicing firm, with assets more than three times those of Northern Trust.

Parker is not, though, looking to compete on size with the largest players. “We are not looking to be the biggest but the best and the most relevant,” she says.

“Our main aim is making sure we have the products and services that our clients want. Our size is actually quite helpful in terms of being able to stay close to clients, partner with them, broaden out the products they need, and that has helped us in terms of client satisfaction. And that is important because you are not going to get new business unless your clients are happy.”

Parker says that, compared to Northern Trust’s main competitors in the asset servicing industry, its return on equity (14.9% last year) and organic growth over the past few years has been higher. “It is really about focusing on the right kind of growth and the right kind of solutions: making sure that clients are satisfied and that employees are engaged. If we get those things right, everything falls in place, but if you get those things wrong, it starts to go the other way.”

Significant new business over the last couple of years includes providing services to six of the UK’s eight new pooled local government pension schemes. They replace around 90 smaller schemes, the assets of which have been decanted into the new mega-schemes.

Overall, Northern Trust grew its UK pension assets under custody by more than $72 billion last year, a year-on-year rise of 8.5%, with the increase primarily driven by new client mandates as well as client asset inflows.

The largest structural change that Northern Trust has implemented during Parker’s tenure as chief executive was the moving last year of its EU bank from London to Luxembourg. The relocated bank will service continental Europe following the departure of the UK from the 27-member trading bloc, while London, with 1376 employees, will remain the firm’s regional headquarters.

Northern Trust’s presence in Luxembourg, where it now has some 300 employees, has grown steadily since it was first established in 2004.

Following its 2017 acquisition of the fund administration servicing units of UBS Asset Management in Switzerland and Luxembourg, the company has targeted strategic growth in Luxembourg, which is the largest funds distribution centre outside of the US.

As well as doubling Northern Trust’s business in the Grand Duchy, the move also added a presence in Switzerland.

Since then, around three-quarters of Northern Trust’s new business in Luxembourg has come from alternatives.

Other key European markets in which the company is seeking to grow include the Nordics and the Netherlands.

The rise of investor interest in alternatives is also happening at a global level, to the extent that a PwC survey of 2017 forecast assets in alternative classes could rise to $21 trillion by 2025, effectively doubling since 2016.

Another of the main trends in asset servicing in recent years, Parker says, has been technological change, into which Northern Trust has invested an impressive $2.4 billion over the past three years.

“We are at the point later this year where we will be rolling out some new capabilities around digital, specially related to fund administration for asset management clients and for asset owners, pension funds and sovereign wealth funds that manage their own assets,” she adds.

“New technology allows a lot more to be automated and a lot more data to be brought together to get better insights into what investment patterns, subscriptions or redemptions might be telling you about who is investing and why.”

On the subject of promoting workplace diversity, Parker points to the fact that Northern Trust is a signatory to the UK’s Women in Finance charter, which in 2016 committed the firm to increasing the proportion of its senior staff from 30% to 35% by 2020: a target that was reached a year ahead of schedule.

In addition, all interviewing panels now have to include at least one senior woman and two of the firms’s three Emea divisions - Northern Trust Asset Management and Global Family Office - are led by women.

The impact of coronavirus on the funds industry is still unknown, but many firms were already planning to slim their workforces before the crisis got underway.

Parker, however, strikes an upbeat tone when asked whether Northern Trust has similar cost-cutting plans. “We do look at where we have our employees and what happens when we automate something,” she says.

“What we have generally seen as we automate things is that our growth then takes up that capacity, but we are always trying to make sure we have got the right people in the right place doing the right things.”