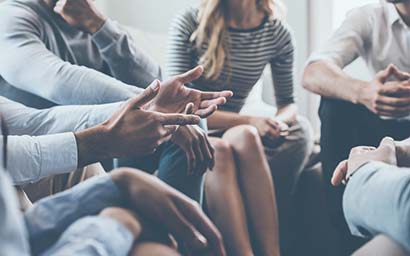 Fund managers are neglecting billions in value every year because of sub-optimal corporate action decisions, Nicholas Pratt is told.

Asset managers are failing to consider corporate action decisions properly and it is costing beneficial owners billions in losses. This was the bold opening statement of a white paper at the end of 2018. The study, ‘Corporate Actions: the case of the missing billions’, was conducted by the law firm Greenberg Traurig and commissioned by Scorpeo, a software vendor that has developed a tool for corporate actions.

Yet despite the ulterior motive, the white paper underlines its point with some compelling numbers and a clear argument. “The problem is massive. It is not a potential problem. It is a problem that is happening now,” it states.

Scorpeo has been collecting data on voluntary corporate actions since 2011 and has found that every year, an average of €1 billion is lost globally on sub-optimal elections in scrip dividends alone. “There is no reason that asset managers (or the custodians that act on their behalf) should not have systems in place that value corporate action determinations on the election date, and that process corporate action determinations such that the full value of the optimal election is captured for the beneficial owner. These are critical functions that have been neglected by a sizable cross-section of asset managers,” it states.

It is not the first time that asset managers have been cited for their inefficient approach to corporate actions. It is a subject that has come up repeatedly but is typically neglected because it is felt that there are other priorities. For the past decade, the raft of regulatory requirements has been deemed as the greater priority.

Or else it has been seen as primarily a processing issue, made worse by the lack of automation and standardisation. However, Scorpeo chief executive Jonny Ruck says processing and technology are not the issue and the fault lies with the asset managers. “I am 100% convinced that it is not a processing issue and nobody is complaining that they cannot get the information they want. Ultimately it is the fund managers’ responsibility beyond doubt. It is their decision to make and it falls squarely to them.” 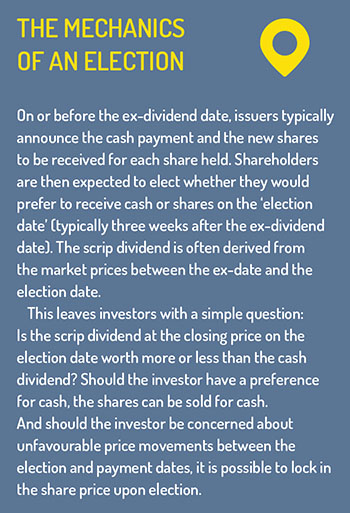 “A number of managers are not even looking at or giving a note in an election,” says Ruck. “When we ran the numbers for 2018, in the UK when the stock was the better election on the scrip option, 80% were still looking for the cash. The default option is too easy.” The problem is getting worse, he adds: the amount of value missed in 2018 was lower than in previous years, but the percentage of people taking the wrong election was higher than in 2016 and 2017.

Scrip dividends are one of the more ‘vanilla’ corporate actions with a binary choice. But while a single scrip dividend may not be worth more than €1,000, when these events are taken over a 12-month period, the numbers become much more concerning.

For example, there are typically around 150 global scrips annually. If each manager misses out on €1,000 on each one, that can add up to €150,000. And if there are 100 portfolio managers at a firm, its losses can quickly rack up to more than €15 million a year.

Tools are available
Unsurprisingly, the vendor community is keen to stress that solutions exist. “The technology is there, the standards are there and the ability to deal with deviations is there. After that, it all comes down to ease of use,” says Adam Cottingham, product manager at software firm SmartStream.

The key, he says, is to make beneficial owners aware of the potential value of each corporate action via electronically delivered analytics and to ensure they can make their corporate decisions electronically. However, he also says that the technology is a “footnote” in the corporate actions process and that there are limits to what it can address.

For example, while a technology vendor can provide all the analytics, to declare a corporate election or decision to be ‘optimal’ is an advisory process and therefore a regulated activity.

Cottingham adds that the adoption of the technology is still at an immature stage. Furthermore, it is not just technology vendors offering corporate actions services. “Prime brokers have always offered this, as have some fund administrators. But the availability of the technology means that more asset managers have brought it back in-house because of the poor service they have been getting.”

To achieve more automation, Cottingham says he would like to see an evolution of the standards and wider adoption of ISO 20022 which can be applied to narration. He would also like to see more action from the asset managers that have, up to now, done very little to address corporate actions.

Decision-makers
There are inevitably non-technology issues that will affect adoption – regulation, internal politics, legacy market structures and the role of incumbent intermediaries – but, Cottingham says, it is the role of technology providers to deal with variance, to turn operators into decision-makers and to being beneficial owners closer to a corporate actions event. One of the biggest challenges to addressing the corporate actions issue has been asset managers’ apathy or the fact that they have had more pressing issues to address. But, he adds, the compliance burden appears to have eased and there is now greater interest in corporate actions optimisation.

There are potentially some regulatory drivers too. MiFID II has a very small impact on corporate actions, but the European Shareholders Directive (ESD), which is mostly focused on proxy voting, does address some of the same issues affecting other corporate actions.

In proxy voting, there is a complex chain of intermediaries – issuers, exchanges, data vendors, central securities depositaries, custodians and proxy agents. The ESD is saying that the flow of information pertaining to proxy votes should be electronic, automated, transparent and free. Furthermore, it is also implying that the same principles should be in place for all corporate actions, including scrip dividends.

Regulatory action may be forthcoming if market supervisors share Ruck’s view that fund managers that fail to optimise their corporate actions decisions are in breach of their fiduciary duty and running the risk of litigation. The main reason for the lack of legal action is that so few investors know about the issue, he says.

Getting rid of the default option would be hard, says Ruck, but a possible solution to the scrip dividends issue is to offer fund managers three options – cash, stock or the better of the two. Scorpeo is working with custodians to provide asset managers with such a service.

“I think momentum is gathering,” says Ruck. “Hopefully people want to put this right because there is value there for the underlying clients, but sometimes people don’t move until they have to. It should at least be reported, that’s the first step.

Litigation brought on by historical losses would be the next step. But I hope people change for the right reasons, for the benefit of their clients, rather than the fear of litigation or the requirement from regulation.”