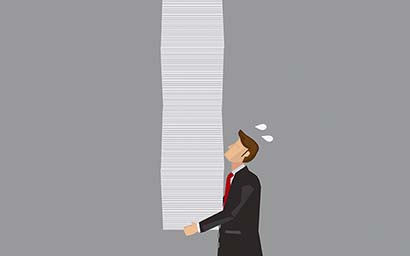 MiFID II has gone live, but fund administrators are still waiting for asset managers to outsource their reporting duties – which run to literally tonnes of paper. Nicholas Pratt reports.

Since the start of January this year, asset managers have had to comply with stricter reporting requirements for clients and regulators under a new EU directive known as MiFID II.

Third-party fund administrators and other specialist service providers expect to build revenues around asset manager reporting requirements if – as expected – many asset management firms find the job so burdensome that they outsource it.

MiFID II, the revised Markets in Financial Instruments Directive, forces the asset management industry to become more transparent. The impact of this and other regulations was highlighted in February when Thomas Richter, head of Germany’s fund trade body the BVI, said one firm had needed to send 560 tonnes of paper to its clients to comply with the rules.

A central plank of MiFID II is cost disclosure, whereby asset managers are obliged to provide investors with a breakdown of all expenses associated with a fund – from sales commissions paid to distributors, to broker payments for stock research and dealing.

Yet, it seems, there has not yet been a rush to outsource reporting – at least according to Declan Quilligan, head of European hedge fund services at fund administrator Citco Fund Services (Ireland).

“With other regulations [such as the Alternative Investment Fund Managers Directive], fund managers have come to us for help with their reporting,” he says. “But with MiFID II reporting, a lot of the core aspects are being dealt with by managers.”

For example, asset managers are not outsourcing the monitoring of their broker research budgets to administrators, though they do rely on administrators to provide some of the underlying data, Quilligan says.

“We are able to provide segregated research accounts but we are not being asked to monitor or review the budgets for that segregation. However, we do have managers coming to us for the information they need to allow them to do so.”

Looking for assistance
Some asset managers are said to be clarifying what their reporting requirements are, while others are still completing necessary IT work.

Asset managers are also fielding information requests from their own investors that often go beyond what is required under MiFID II, but Quilligan says the volume of requested data should reduce over time once investors better calibrate MiFID obligations.

He argues that fund administrators are best placed to provide the bulk of asset manager MiFID II reporting. Some managers may choose to keep the process in-house, or partner to some extent with tech vendors.

“I think there is a genuine trend for managers to stick to their core competencies of performance and asset allocation and I think they will come looking for assistance in the next 12 or 24 months. It is the natural way that outsourcing develops. Service providers invest in technology that asset managers are not able to, better tools that are out of the reach of asset managers,” he says.

Similarly, other fund administrators say MiFID II has not had a dramatic impact on their own operations so far, though there are some outstanding issues to be resolved, including the calculation of transaction costs.

“While there has been an increased demand for certain data, it has not been hugely disruptive,” says Sean Tuffy, a regional head of Citi’s market and regulatory intelligence. “Taking a step back, the overall implementation of MiFID II has gone relatively smoothly and there weren’t the big dislocations that were feared.”

But he adds: “That said, the first few months of MiFID II have thrown up some challenges for the asset management industry, the most notable being the new transaction cost calculations, which are producing divergent and sometimes misleading results. However, this has already been flagged with policy-makers as an issue and further guidance is expected.”

Funds Europe survey
In this year’s Funds Europe survey of third-party administrators, some respondents cite MiFID II as the top regulatory priority for their clients and state that they are being asked to help with compliance.

“MiFID II and its transaction reporting requirements are at the forefront of our clients’ minds,” says Alexandre Pirlet, head of fund administration and distribution solutions at BNP Paribas Securities Services.

“Clients are also looking at us to help them comply with investor protection requirements and ensure products match investors’ risk profile and investment needs.”

At Societe Generale Securities Services, Olivier Blanc, global head of fund services, says: “MiFID II and Priips [the Packaged Retail and Insurance-based Investment Products regulation] are definitely the most challenging pieces of regulation that came into force in 2018,” and cites “growing concerns” among fund managers over their ability to support transparency demands.

Daron Pearce, BNY Mellon’s chief executive of asset servicing, said there is still work to be finished across the industry on MiFID II, both in terms of managing compliance and adjusting business models.

For example, MiFID II provisions around costs and charges overlap with those of Priips, offering firms the chance to clarify their approach.

Another potential impact from MiFID II that will be especially relevant for administrators and other service providers is the prospect of consolidation among asset managers as MiFID II transparency leads to greater scrutiny of managers’ fees, which could play to the strength of larger firms.

Clive Bellows, Northern Trust’s regional head of global fund services, says MiFID II is leading administrators to supply “more granular detail on fees at all stages of the contract cycle”, causing asset managers to renegotiate prices as a consequence and challenging them to preserve margins as they reduce pricing.

The demand for funds to separate broker securities research costs from trading costs may favour the biggest managers with pockets deep enough to fund their own research budgets. After all, most of the world’s largest asset managers, including BlackRock and Vanguard, have said they will pay for broker research rather than charge clients; and some firms that at first said they would not foot the bill, like Schroders and Janus Henderson, subsequently changed their minds.

When two become one
The mergers of Janus Capital and Henderson Global Investors, along with Standard Life and Aberdeen Asset Management that took place in 2017, have been the most notable examples of M&A activity.

A report published in March by PwC, based on interviews with 126 asset and wealth management chief executives, found that 43% had M&A intentions. The report, entitled ‘Optimistic CEOs, buoyant growth, disruption ahead’, gave the main reasons for consolidation as entering new markets, increasing scale and offering wider product ranges.

But the report also found one of the greatest threats for business was the increased level of regulation. Some 83% of the CEOs said they were “somewhat or extremely concerned” about this and the report specifically referenced MiFID II as the most prominent regulation in Europe and one that is set to squeeze margins and fees due to greater pressure from transparency.

A less optimistic view might perhaps say that MiFID II is a greater catalyst for consolidation than are the international growth ambitions cited in the report. While investors may not necessarily suffer from consolidation, service providers do have to worry when a client merges with a firm serviced by a competitor.

The real impact for administrators from MiFID II – both good and bad – could be clearer in 12 months’ time. By then, managers may have decided that they are indeed better served by their third-party administrators for MiFID II and other client and regulatory reporting.

The problem is that there may be fewer of them around.