An open discussion between funds industry experts and initiated by SGG Luxembourg took place in London to examine  the implications of Brexit for UK fund managers marketing to the EU. 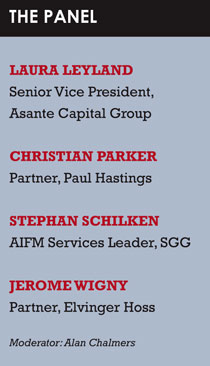 The panel considered the background to possible Brexit changes; how UK funds are marketed in Europe; what is currently known about Brexit; what could possibly change after Brexit; and how managers might address those changes.

Importantly, the feeling was that the UK would not possess an EU marketing passport in the future. This belief is supported by the fact that the US and Switzerland have never had EU passports themselves. Part of the Brexit negotiation will be whether the UK could obtain some form of equivalence.

It was noted that a number of large players in the industry had already set up AIFM ManCos – such as Blackstone, BC Partners and Carlyle. As a contingency, a number of asset managers have been investigating setting up ManCos, in many cases replicating existing structures they have elsewhere, such as in Jersey.

The options for firms are whether they should establish their own AIFM ManCo, or rent one from a third party.

The need to set up an AIFM ManCo will depend upon size or assets under management, but it is also down to the maturity or complexity of the distribution network – in other words, there is no point having a passport if a firm does not know how to use it. A firm may have the right tool, the right fund and the right passport, but it would also need the right marketing approach. For example, many US AIFMs only started to succeed when they set up bases in Europe, mainly in London. With Brexit, this is likely to mean that in future, success in Europe will depend on having European structures and possibly a European base.

The belief was the UK would not be permissible, but the issue needs more clarification. It was understood that so long as there was a Luxembourg AIFM ManCo then both investment and marketing could be delegated back to the UK, as long as there was appropriate oversight in Luxembourg.

The question of what type of AIFM ManCo would be set up in Luxembourg – that is, own or third-party – would likely depend upon a firm’s size. It was also commented that if setting up an in-house AIFM, it could take up to two years for full approval by Luxembourg’s financial regulator, the CSSF, for the more complex structures. In the case of Luxembourg, the Conducting Officers of the AIFM ManCo would need to be based in Luxembourg.

SPEED TO MARKET
In looking at the differences between an owned AIFM and a rented one, the speed to market is obviously a key differentiator. An owned AIFM is already licensed.

There is sometimes a fear that a rented solution somehow means less control; however, so long as the investment decisions comply with the delegated mandates and best practice is employed, this is highly unlikely.

The rented AIFM ManCo in Luxembourg would comply with regulations at the same time as working with the industry. It would also provide a Conducting Officer or Risk Manager, which for any bespoke AIFM ManCo would be a high cost and require a scarce resource if going it alone.

The purpose of the rented solution is to be an integrated partner of the investment manager providing the right regulatory solution to facilitate AIF cross-border passporting.

Action is needed now, both as insurance for the future and to maintain the momentum already created in this growing investment area.

The debate continued with audience questions, which demonstrated a clear interest in the subject as investment managers look at Brexit contingency planning. Watch this space.