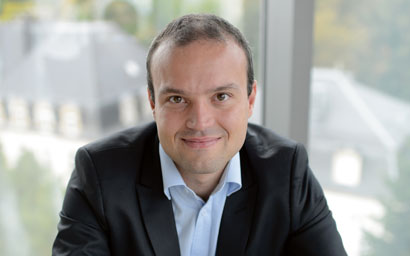 Fabrice Kremer, a fund selector at Banque de Luxembourg Investments, has berated fundamental managers for failing to beat indices, but he remains committed to active funds. He speaks to Nick Fitzpatrick.

Like many fund of fund managers, Fabrice Kremer will be glad 2016 is behind him. Early in the year, his BL Fund Selection 0-50 fund was down by 3% – but it finished the year with a return of 1.8%.

Getting to that point was not “all plain sailing”, he told investors in his management report for the final quarter of the year.

The decision to invest 5% of the portfolio in the Julius Baer Euroland Value fund in anticipation of a sector rotation certainly helped. It was probably Kremer’s best call of the year, as the Julius Baer fund ended 2016 with a 25.3% return, contributing two-thirds to the performance of the BLI fund.

Kremer continues to be very positive on European equities, which recorded their biggest weekly inflow for more than 13 months in the fourth week of March, according to EPFR Global data.

“Europe remains the place where it is more possible for active fund managers to add value and generate alpha,” Kremer tells Funds Europe. Notably, he had berated active fundamental managers in his management report for their “almost universal incapacity” to beat their index or create value in 2016, “a year full of pitfalls and sector rotations”.

But he remains completely committed to active managers. With the exception of a few tactical moves, he does not see a significant role for ETFs in funds of funds such as his.

‘ONLY NATURAL’
Evidence from the recent ‘Spiva Scorecard’ from S&P Dow Jones Indices found that about 20% of fund managers beat the S&P Europe 350 benchmark in 2016 and about a quarter beat it over three and five years. Finding these managers is hard, but Kremer effectively started the quest early, while still in education.

Kremer joined Banque de Luxembourg Investments in 2006. His final dissertation for a post-graduate degree in financial products at the University of Angers, France, was in multi-management.

With this background, and an economics degree from the University of Metz, France, his corporate biography says: “Fabrice’s move to Luxembourg seemed only natural.”

He also works as a fund selector for the Banque de Luxembourg and its parent group, Crédit Industriel et Commercial. About 140 funds are on the bank’s buy-list.

Banque de Luxembourg Investments has around €11.11 billion of assets under management and some €1.7 billion is in the multi-manager business.

The Fund Selection 0-50 product manages around €429.4 million of assets. The fund is for the private bank’s customers, but it is also distributed through BLI’s fund distribution team to institutions and other funds of funds.

The investors, at least most of them, are euro-based. This means Kremer considers it risky to buy assets in other currencies apart from the euro, due to fluctuations. The fund, which has a 28.16% return since its June 2009 launch, was 25% exposed to Europe on a geographical basis in March, with European funds making up four of the top five holdings.

“There are a lot of issues in Europe such as Brexit. But it’s a cheap asset and the currency is cheap,” he says.

Yet the fund’s universe is global and includes a significant, albeit small, exposure to Russia. Asked about emerging markets, another geography seeing inflows in recent months, Kremer says that because the correlation between emerging market equities and the US dollar is “massive”, the currently strong dollar suggests weak emerging market equity performance.

“I won’t buy emerging market equities before I see a trend in the US dollar, but for bonds, the relative yield of emerging market local currency versus developed market bonds is very attractive. Spreads are nearly at a record high,” he says.

Kremer also has a high conviction for absolute return funds. On an asset class basis, the fund had a 45% exposure to absolute returns at the end of March (followed by 31% for equities and 15% for bonds).

Why is this, given that absolute return funds have suffered underperformance over the past year? Kremer says this all part of a cycle.

“We’ve been investing in absolute return funds since before last year and have held our positions. Exposure is high for us. But last year was not a sell signal; it was just a bad year.”

There were some clear reasons why absolute return funds underperformed in 2016, such as the massive rotations inside equity markets, especially on a sector or a style basis, Kremer observes.

Last year was a particularly bad year for ‘trend followers’, which includes commodity trading advisers, or CTAs, and some global macro funds. They were victims of the several rotations that occurred in 2016 due to Brexit. Long/short global macro and CTAs are 90% of the absolute return universe.

POSITIVE YEARS AHEAD
Absolute return performance usually move in cycles of four-to-five years, of which three years will usually see strong performance, Kremer says. His view is that the next few years should be positive.

“There is a momentum factor in them, and that’s usually very painful when there’s a turning point. We consider last year to be that turning point and we now expect that three to four years of more interesting performance are in front of us. The signals started in December and have improved a lot, especially in long-short equity.”

Absolute return funds are also sensitive to short-term interest rates because the funds end up with high levels of cash when they short sell securities.

Kremer’s view is that absolute returns are an alternative to fixed income. Being sensitive to the cash return gives them “a kind of negative duration” and they will benefit from a rise in interest rates, which is not the case for fixed income.

“When we can get good-quality bonds offering a 3%-5% return, then we’ll switch,” he says.

With a high commitment to active managers, whom Kremer’s fund typically holds for about three years, there’s little point in ETF providers knocking on his door.

Last year, Kremer says, ETFs were used to trade quickly in and out of US biotech, and in the year-end US rally.

In fact, he considers the strategic use of ETFs almost a dereliction of duty for active wealth managers.

“We use [passive management] as rarely as we can. We consider ETFs to be a negation of our job. All our time is spent looking for managers to beat benchmarks and if we invest in ETFs, it’s like we have capitulated on that.”

He adds: “We know ETFs are cheaper and could lower the TER of our fund of fund, but we also think that it will lower returns because ETFs will never outperform the benchmark – and we have to find fund managers that can!”