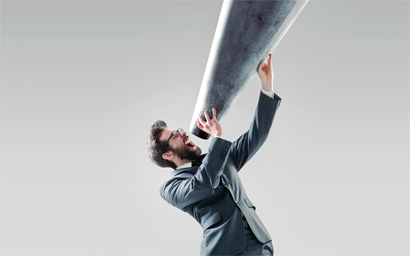 Independent fund directors are representatives of the public – but was the extra emphasis Ireland placed on them following the financial crisis just PR? By Nick Fitzpatrick.

In the depths of the financial crisis, as Madoff and money market funds span out of control, investment funds came under pressure to restore investor confidence – not just in markets, but in the fund vehicle itself. The very trust that investors had placed in funds was under threat and, in the eyes of many, fund firms seemed indistinguishable from banks.

Tougher investor protection through regulation is a key element of this restoration exercise, but major cross-border fund centres have added an extra layer to regulation using voluntary codes to instil better fund governance.

Irish Funds, the trade group formerly known as the Irish Funds Industry Association (IFIA), introduced its corporate governance code for funds in 2012. Among extensive recommendations was one for funds to have at least one independent director.

Several years after its adoption, and following a period in which fund flows have returned to the black, it is worth asking about the code’s effectiveness.

Last October, Noel Ford – an Irish independent director, a director of Governance Ireland, and the former chief executive for Skandia Global Funds listed in Ireland – published a paper called ‘Exploring the impacts of Ucits directives within the Irish funds industry’. 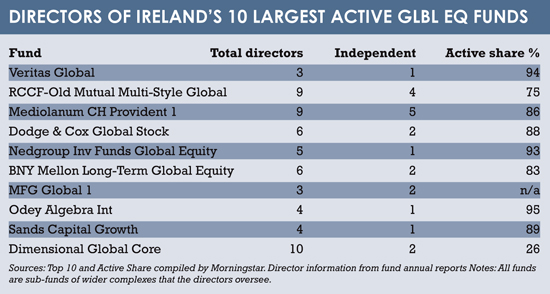 Contributions came from key stakeholders in the Irish industry, one of whom wrote: “The IFIA code of corporate governance is a nonsense … Does the IFIA own it? No. Does the regulator own it? No. Do the investors read it if they are retail? No. So this is nonsense.”

Everyone agrees there should be a code of conduct, says Ford. “But a question might be, and this is highlighted in the research paper, does it actually add value to the investor proposition or the overall standard of governance that’s applied within the industry? The broad consensus from the study was that you’d be hard pressed to find that it does.”

The fund governance code came about after the trouncing of Ireland’s reputation as a financial centre in the financial crisis, although the major scandals and collapses that caused this were outside of the funds industry – for example, a scandal around reinsurer Gen Re.

An obvious exception was the Thema Fund, a sub-fund of an Irish listed Ucits vehicle and which had acted as a feeder to Bernard Madoff’s ponzi scheme. Thema was a clear case of failed governance.

With crises in its banking and insurance sectors, Ireland was being labelled ‘the Wild West of European finance’.

The International Monetary Fund (IMF) gave Ireland a €22.5 billion loan as part of an €85 billion international rescue package. This year, it will complete its first assessment of Ireland and other countries’ financial stability, under the IMF’s Financial Sector Assessment Program.

The IMF notes that since the crisis, Ireland’s banks have shed debt and raised capital, but still contain a legacy of non-performing loans. It also notes the funds industry has grown “enormously” – a sign, perhaps, that the industry has restored trust.

The IFIA drew up the code – its full name is the Corporate Governance Code for Collective Investment Schemes and Management Companies – at the request of the Central Bank of Ireland (CBI) in 2010. The CBI’s own credibility was in tatters at that time, with a reputation more as a financial facilitator than a regulator.

“Ireland had to be re-presented back to the international community after the IMF stepped in, so something like a code of governance was telling people we were working to the highest standard,” says Ford.

INDEPENDENT DIRECTORS
Although the code has no regulatory strength, it consciously draws its recommendations from existing corporate governance practices, including those drawn from Ucits directives.

One of the numerous recommendations, for example, was for funds to appoint at least one independent director. This elaborates on a concrete requirement of the CBI for ‘registered’ funds to have two resident Irish directors who must also pass a CBI probity test.

Analysis by Funds Europe of Ireland’s top ten largest global equity funds shows that six out of ten of the umbrella funds they belong to have more than one independent director.

Two years ago, the CBI studied the industry’s take-up of the code, but did not make the results available when requested. The regulator referred Funds Europe to Irish Funds, which said it had nobody available to comment.

Might it be the case that following the normalisation of the Irish funds industry, the governance code has become a forgotten public relations exercise?

“The number of key functions to be looked at makes this a huge task and the CBI is insisting that the independent director is the only person to do this, not an external auditor or legal firm,” says Ford.

Ireland’s financial regulator wants to create a climate in which the industry takes independent directors seriously and where they are more informed about the control environment.

If it succeeds, then the voice of the consumer could get louder.