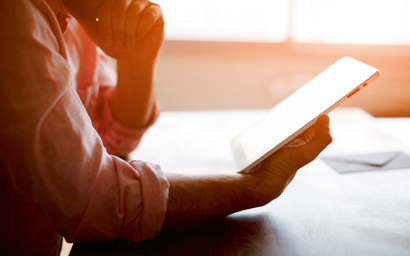 Robo-advice is still a ‘yowling bairn’, says Fiona Rintoul, who looks at the birth of this automated service and asks what it may become later on.

“Yomoni’s ambition is to democratise wealth management, by offering a management solution that is 100% online.” That’s how La Tribune, the French financial tabloid, describes one of France’s leading robo-advisers.

Reading about Yomoni, which claims to be “revolutionising savings”, you could be forgiven for thinking it’s 1789 all over again. The robo-adviser is variously described in the French press as the “spearhead of a completely new approach to savings and investment for French people” and as “the one-time Swiss banker returned to France to democratise wealth management”.

Democracy. Revolution. It’s an alluring vision for anyone tired of the fusty middle-aged white men in dark suits who still characterise financial services – a vision, in the case of Yomoni, backed by a cool gangsta name and aimed above all at les jeunes.

But is robo-advice really such a revolutionary concept? Sometimes hailed as a kind of great white hope that will bridge the advice gap created by fee-based financial advice, robo-advice divides opinion. Some see it as a way of providing reasonable-quality financial advice to mass-market investors unwilling to pay a human. Others see job cuts (and in the banking sector, there have already been jobs lost at the Royal Bank of Scotland because of robo-advisers) and a certain unwelcome shirking of responsibility.

Questions have been asked in the press about why investment advice needs to be delivered in such an automated fashion. Sceptics might argue it is to do with financial institutions selling products without worrying about mis-selling scandals, which have dogged the advice industry in the past. The UK’s Treasury and UK Financial Conduct Authority (FCA) released the Financial Advice Market Review on March 14, which recommends an FCA consultation on robo-advice.

That’s the cynical view. On the other side are the ‘techies’ who are in thrall to all the clever things that robots can do.

“The rise of robots, ‘smart robotics’ or – in this specific instance – robo-advisers, can actually transform how people have always done business, into how they have always wanted to do business and, more importantly, in the way that best suits today’s busy consumer,” says Neil Kinson, a vice president at Redwood Software, a company that offers “enterprise process automation”. This, apparently, “allows staff – from banking staff to CFOs – to redefine their job roles and focus their time and attention on more innovative tasks that can add real value to the business”.

WEALTHY TURN UP THEIR NOSES
You could argue that a roboadviser is just a poor man’s human being – and, indeed, research from Legg Mason Global Asset Management shows that the rich are turning their noses up at roboadvice. In Legg Mason’s 2016 ‘Global Investment Study’, which covers 5,370 high-net-worth investors across 19 markets and, ironically perhaps, is conducted online, only 39% of respondents globally said they trusted online advice, compared with 69% of investors who trusted their existing financial advisers.

“The survey clearly suggests that, while many robo-advisers are targeting wealthy clients who have traditionally used an IFA [independent financial adviser] or wealth manager, they have a real struggle ahead to persuade investors to make the switch,” says Adam Gent, head of UK sales at Legg Mason.

Is there a whisper of fear in those words? Perhaps. You could see a 39% trust rate as a pretty good start in a market segment that can afford face-to-face advice. The truth is robo-advice is still a ‘yowling bairn’, a crying baby, and it’s hard to know what it’s going to be when it grows up – harder still to know if it’s a threat to traditional IFAs and wealth managers.

“It’s at a very early stage, especially in Europe,” says Guillaume Prache, director of the European Federation of Investors and Financial Services Users, more commonly known as Better Finance. “At the moment, it’s not a threat to anyone.”

Yet it could still be a benefit to investors. Better Finance sees robo-advice – which it prefers to call “robot investing” – as a broadly positive development for investors, with the potential over time to have a positive impact on the actual performance of investments. That’s because robot investors almost exclusively use low-cost index funds. Better Finance says that the simplified fee structure, made up of an advice fee and the underlying fund fee, also makes robot investors easy to understand for individual investors.

“It’s a simpler and more transparent fee scale,” says Prache. “There is almost total alignment between the client and the adviser.”

Certainly, robo-advice is cheap. Research conducted by Better Finance into a sample of robot providers in selected EU countries (Belgium, France, Germany and the UK) found that they charged 69-169 basis points. The charges are lower still in the US, and here in Europe one French robot adviser, Marie Quantier, is following the revolutionary path of charging a fixed fee of €5.90 a month plus 5% of annual gains.

What about Prache’s claim that robot investing provides near-total alignment with the client? Quelle joie! How many asset management companies have boasted of how aligned their interests are with those of their clients? But how aligned are they really? The very fact that companies protest so much about alignment suggests that the degree of alignment may not always bear close inspection.

The problem with robo-advice from the point of view of established financial institutions – apart from the reliance on index funds, which not everyone will celebrate – is that while robo-advice may be cheap for the client, it isn’t necessarily all that cheap for the advice provider.

It costs money to employ people as advisers, yes, but they do come with the software pre-loaded. The costs of robo-advice are different to the costs of delivering financial advice in the past, says Peter De Proft, director general of the European Fund and Asset Management Association (Efama), but that does not mean they are lower.

“A financial institution will incur costs in system build or acquisition, but will also face ongoing costs in order to ensure the tool remains robust through maintenance, and is compelling and relevant for customers, as intervention is always required at some stage of the process.” There is also a cost involved in acquiring customers. However, this should mitigate with time, and when it does, the cost of servicing each client robotically should on average be lower than under existing face-to-face models.

Neither are robo-advisers a clear win-win for clients, although concerns about whether they will be adequately regulated do not appear to be all that well founded. Certainly, Better Finance is pretty sanguine in this area.

The more compelling problem is the nature of the advice given. The reasons that Better Finance insists on calling robo-advisers “robot investors” is that very often they provide asset management services and the advice they give isn’t very exhaustive or personalised.

And there’s the rub.

In a response to the European Securities and Markets Authority’s joint committee discussion paper on automation in financial advice, Efama noted there is a danger that robo-advisers will fail to obtain adequate data from consumers to be effective enough and engaging.

“Most consumers will want the opportunity to access a human advis[e]r to verify or validate their understanding of the investment process,” Efama said. “Firms will need to consider a variety of access points, for example by telephone, chat or email to ensure continued consumer engagement.”

Efama is also concerned about ongoing engagement. “If the customer’s financial situation changes, there may be no, or inadequate, means to enable the automated tool or company behind it to contact the customer to ascertain this information.”

NARROW CHOICE
But even if the algorithms used are effective and engaging and have been thoroughly tested, it all goes for nought if the choice of portfolios is excessively limited.

“Sometimes the advice is really very standardised,” says Prache. “One company offers only three portfolios. Even if the questionnaire is detailed, you are still directed to just one of three portfolios.”

Of course, you might not get a wider choice than that if you visited certain human financial advisers. Nonetheless, one can see why the wealthy investors that Legg Mason surveyed “simply prefer the personal touch that face-to-face advice delivers”.

It would be a mistake to dismiss robo-advice, however. The younger generation, says Prache, will be attracted to it and will use robo-advisers on their smartphones. In its submission to Esma, meanwhile, Efama suggests taking “a closer look at the use of big data available to non-financial institutions (such as Amazon, Facebook or Google), as well as their capabilities to provide new services (as happened in the payments space)”.

The very mention of these names reminds us how much and how quickly things can change in the digital world. That being the case, the most urgent task for anyone who is concerned that savers are properly advised in the digital age is perhaps to promote financial literacy.