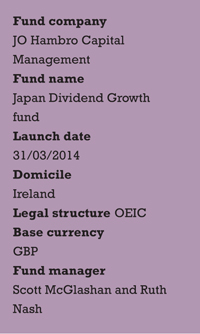 One consequence of greater domestic involvement could be bigger dividends. “A dividend culture is emerging in the Japanese equity market,” says Ruth Nash, also a senior fund manager at JO Hambro. “While pay-out ratios in Japan still lag the global average, this is likely to change as companies attempt to cultivate long-term shareholders by increasing dividends.”

McGlashan and Nash are co-managers of the Japan Dividend Growth fund, which invests mainly in large-cap stocks and will incorporate a blend of dividend growth and dividend yield. 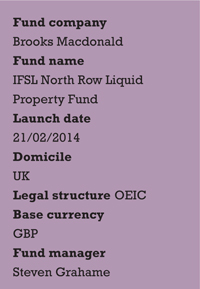 PROPERTY WITHOUT BRICKS AND MORTAR
For many investors, real estate is an appealing asset class because it is a “real” asset, offering all the assurance that bricks and mortar provide. But according to North Row Capital, part of Brooks Macdonald Funds, not every investor in real estate wants to own physical property.

The firm’s IFSL North Row Liquid Property Fund, which is now open to UK retail investors, aims to recreate commercial property returns by investing in property derivatives and equity and debt linked to property markets. The advantages include a lower minimum investment (£10,000) than most property funds and no liquidity restrictions associated with buying and selling real property assets.

Steven Grahame, fund manager, says he expects total returns from property in the UK to exceed 12% this year, greater than an industry consensus he puts at 9.3%. 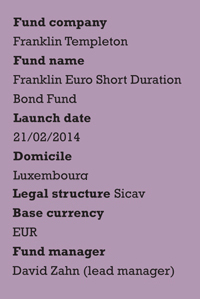 MAKE IT SHORT-DATED
Bond investors are scrambling to reduce the duration of their bond portfolios as a much-feared rise in interest rates looms on the horizon. Franklin Templeton recognised the trend yet found it had a gap in its product range for a fund investing in short-duration bonds in the eurozone.

The Franklin Euro Short Duration Bond Fund will invest in short-dated fixed and floating-rate bonds from corporates and sovereigns of investment-grade or comparable quality. It has some flexibility to invest outside the eurozone or in derivatives. 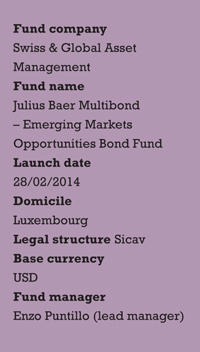 STILL HOPE FOR EM BONDS?
The fashionable thing to say about emerging markets is that they’re not all moribund, one just has to be selective about which to choose. Swiss & Global Asset Management appears to hold this view; it says its new emerging market bond fund will be untied to a specific universe or benchmark to give its managers the flexibility to gain returns in this difficult asset class.

“We focus on countries where changing fundamentals are not yet fully reflected in bond valuations,” says Enzo Puntillo, head of fixed income emerging markets. 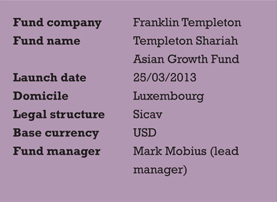 The product was designed for Islamic investors who wanted access to the growth markets of Asia without compromising their religious principles. The equities in the fund’s universe would be screened by Islamic finance consultancy Amanie Advisors to ensure that any un-Islamic stocks were excluded.

One year on, it seems the fund has suffered alongside its peer group from the selling of emerging market assets that followed the US Federal Reserve tapering announcement. However, it is interesting to the note that the sharia-compliant fund’s performance of -12.9% in the year ending February 28 is slightly better than the performance of the original, noncompliant fund, which is down -13.2%.

The fund’s benchmark, the MSCI AC Asia ex- Japan Islamic Index, declined by a more modest -4.4% in the same period.

A spokesman for Franklin Templeton says that “while there are performance challenges on the short term, these are medium to long-term funds that provide higher returns over a longer duration”.