How expensive will the AIFMD be for hedge funds and their administrators? Stefanie Eschenbacher seeks numbers and asks if costs will be passed down the chain.

While core hedge fund administration services will not be impacted by alternative investment regulations, additional layers of regulatory reporting and increased oversight activities for depositaries will push up costs.

The European Union’s Alternative Investment Fund Managers Directive (AIFMD) is the most important regulation for hedge funds in decades; it aims to establish a harmonised framework for monitoring and supervising the risks posed by hedge funds and their alternative investment peers. It comes at a price.

The two most cumbersome parts of the AIFMD are the reporting requirements set out in Annex IV, which requires hedge funds to produce ample information, ranging from counterparty risk to details of invested assets, and the fact that hedge fund managers must appoint a third-party depositary with responsibility for asset safekeeping, monitoring of cash flow and oversight duties.

He adds: “It is yet unclear whether fund administrators will be able to pass on the costs of these additional resources.”

Jean Devambez, head of asset and fund solutions at BNP Paribas Securities Services, says much will also depend on what is covered by the pre-existing administration agreement.

Devambez estimates that if all services a fund administrator can provide are combined – encompassing depositary bank services, reporting and independent valuation – costs for a single hedge fund could go up by two basis points.

Depending on the size of the fund, its complexity and activity, he adds, it could be as much as 20 basis points.

Fund administrators are widely expected to absorb the cost as part of their management fee.

“They will not go back to their clients asking for a specific additional fee linked to reporting or depositaries,” he says. “Maybe some will, but our experience is that they will absorb it.” 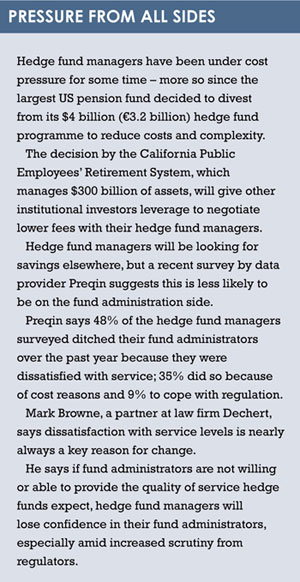 Paul Spendiff, the head of European sales, fund administration and middle office at Apex Fund Services, says the depositary services will be the most expensive part of the AIFMD.

Smaller hedge fund managers, those that just trip into the scope of the AIFMD with €100 million of assets under management, including leverage, will be penalised most.

Spendiff says the cost of a “depo lite” service – full depositary services are only required for European onshore funds – for a relatively sub-scale hedge fund manager with $40 million (€32.4 billion) of assets under management that is three times leveraged will be severe.

Depo lite services can cost up to €50,000 a year, or between one and two basis points, from the largest providers, though the minimum from a non-US bank can be as low as €25,000.

Depo lite is not paid out of the management fee, but paid out as a fund cost. However, Spendiff says it is deducted from the fund performance before managers take their management or performance fees.

“More importantly, it is another cost for the investor,” he adds. “It is true that the additional reporting and compliance costs are borne by the manager and those larger managers are better equipped to cover this cost from their 2%.”

“They will be much higher where they have higher fixed costs on the smaller funds,” he adds. “It is more difficult for them.”

Mark Browne, a partner at law firm Dechert, says pricing could change significantly if a depositary were hit by a large liability as a result of its obligations under the AIFMD.

“It is still a way to go, what may happen if a significant event triggering depositary liability occurred; whether depositaries would continue to stay in the market, or if they were to increase their prices,” Browne says

Lesser known fund administrators are prepared to close on a fixed-fee basis – Browne says a charge of between €40,000 and €50,000 per year is typically the minimum. However a minimum monthly charge, with a standard charge of between two to four basis points, depending on the asset class and the level of risk associated with the investment is more usual.

ANNEX IV REPORTING
This could mean providing access to the fund administrator’s Annex IV reporting portal, whereby the hedge fund manager prepares a file with all required information and only uses the portal as a reporting tool.

Or it could mean a full Annex IV reporting service whereby the fund administrator coordinates the reporting process and provides most of the information, including the information related to questions on risk.

COMPLEX FUNDS
Devambez says larger, more complex funds need to provide a lot of details, with the specific challenge that a lot of data will come from different sources, ranging from the fund manager to fund administrators.

“It is a lot of work to collect, consolidate and check to provide the reporting,” Devambez says. 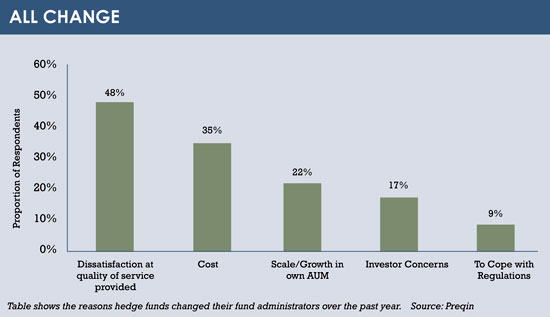 Browne says that where Annex IV reporting services are provided on a standalone basis, the cost could be between €3,000 and €5,000 per year.

Nevertheless, Browne says costs for hedge fund managers from third-party providers have not risen to a significant extent as a result of increased regulation. Where there has been an increase, Browne says fund administrators have mostly absorbed it.

“The pricing is still at a stage of flux, but it seems that the pressure is more on the downward side than on the upward side,” says Browne. “There is a lot of competition in the market, and as the market gets more used to new obligations, there will be downward pressure.”

Damien Hill, the head of legal at Aurum, a funds of hedge funds manager, says some funds seeking AIFMD compliance may face depositary costs for the first time.

CUSTODIAN CHARGES
“For those operating all but the simplest of strategies, fees for such services may be higher than the corresponding custodian charges,” Hill commens, adding that only time will tell which of these costs are borne by the manager or will be passed on to the fund.

“Other regulatory obligations [such as the Foreign Account Tax Compliance Act] may also be increasing the administrative services bundle,” Hill comments.

“Administrators will no doubt be keen to itemise out all these separate charges, to keep the headline fund administration fee the same, but the reality is that the total fees to be paid in respect of these and similar services will increase as a whole.”