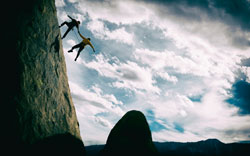 The bull market in US equities has left active managers struggling to beat the market return. Alix Robertson looks at the challenges they have faced and hears why these may evaporate in the coming year.

While Europe enters into quantitative easing to support its economy, and emerging markets offer a mixed outlook, the strong progress of the US economy stands out from the crowd.

The job market is improving, with unemployment down to 5.6% at the end of 2014, and consumer confidence is up – backed by tailwinds from the decline in energy prices.

Yet while the US market was breaking records, more than three-quarters of US equity funds that reference the S&P 500 and are also available in Europe failed to beat the benchmark, according to Morningstar.

“It’s been, for active managers, among the worst years for US equities,” says Nadia Grant, fund manager at Threadneedle Investments.

AMERICAN ESCAPE
In US equities a bull market has been running since 2009, with three consecutive years of double-digit gains.

The popularity of the asset class was highlighted as 2014 drew to a close, when risk-averse investors concerned about Eurozone instability turned to US equity funds. This led the fourth quarter of 2014 to boast the biggest flows into US equity funds since the start of 2013, according to research from fund flow data provider EPFR Global.

It was passive funds that benefited the most. Passive US equity funds attracted $166.6 billion (€222.9 billion) in 2014, while actively managed funds continued to experience outflows. December marked the 10th consecutive month of outflows from active funds last year, and the total outflow for 2014 stood at $98.4 billion, according to Morningstar’s January US Asset Flows Update.

Focusing on large-cap funds, only 9.6% of those that were in the top quartile in 2012 managed to hold their position through to 2014. Over five years, this figure drops to only 5.8%.

The Morningstar data paints a similar picture. Morningstar provided Funds Europe with information on the 1,032 US equity funds that invest in large caps, hold the S&P 500 as a benchmark and are available to investors in Europe. Of these, the data shows that 214, or 20.7%, had a positive excess return versus the S&P 500 in 2014.

TOUGH TO PREDICT
Last year was not an anomalous result for active managers in US equities; the efficiency of the US market creates a tough atmosphere for stock-pickers. But the recent combination of an equity bull market and a low-volatility equity environment has proven a further challenge.

JP Morgan Asset Management (JPMAM) was one of the firms that saw success with its actively managed US equity funds. The JP Morgan US Select Equity A Sicav fund returned 13.25% in 2014, beating its benchmark, the S&P 500 (net total returns with dividends reinvested, in euros) by 0.27%. Its return over the three-year period is also strong at 20.32%, compared to 19.64% from its benchmark.

“Managers tended to struggle because of the performance of utilities and Reits (real estate investment trusts), both looking expensive from a value or growth manager’s perspective … and yet both were up very, very strongly overall,” she says.

“Just looking at performance over one year isn’t enough; we’re long-term investors and we would like our clients to look at a long-term approach to investing,” she adds.

Nadia Grant, fund manager at Threadneedle Investments, manages the Threadneedle American Fund. The Sicav version of the fund has performed well in its peer group, but did not manage to outperform its benchmark, the S&P 500 (total return, in US dollars). For 2014 the fund returned 8.95%, while the index returned 13.69%.

The Threadneedle American Select Fund, which Grant also works on with lead manager Diane Sobin, had a particularly difficult year, returning 4.90% in 2014, according to data from Morningstar.

This correlation makes the job of a stock-picker more challenging, as the performance of the best and worst stocks are less clearly defined.

Grant also says that to see the value of active management, investors should focus on the long term, looking at performance over three, five or 10 years.

“Over the cycle the shocks would have been absorbed, because they’re abnormal, they’re not happening every day,” she says.

“You may have one year variance there, but what you really want to see is [if there is] a disciplined investment process and a robust approach to stock-picking.”

She adds that the cyclical nature of the markets is an important factor to consider when assessing the performance of actively managed funds.

BETTER TIMES AHEAD
However, Grant is optimistic that 2015 will offer a better environment for active managers in the US equity space.

“We think correlation ought to normalise and, as the economic recovery is underway, that is supportive for the fundamentals of the companies, allowing the idiosyncratic risk to overtake – and therefore stock-pickers should do better.”

Although the climate of narrow markets has been a problem, he believes it may be coming to an end.

“What I’ve found is that when that particular phenomenon evaporates and the dispersion increases dramatically, then all of a sudden people start to look at how diverse the return profiles of active managers are.”

Although this doesn’t mean that the majority of fund managers suddenly outperform, he adds, it can provide the opportunity for talented active managers to show their skills again.

Lebleu also sees the potential for an interest rate rise in 2015 as a possible advantage for active US equity fund managers, as the fees that come with active management make it hard to outperform when risk-free rates are at zero.

He says: “As things on an interest rate front normalise from here, and the risk-free rate is no longer accurate at zero, then it will not only have an economic outcome, it will also have an impact of levelling the playing field a little bit in terms of the relative cost base of active versus passive.”

At Franklin Templeton Investments, Grant Bowers, portfolio manager and research analyst for Franklin Equity Group, predicts an increase in volatility in 2015, which again could offer new opportunities for active managers.

Bowers says this will prove an advantage for active managers over tracker funds that are unable to use stock-picking to navigate through risk.

“I think it’s an environment where active management will really have an opportunity to shine, and show the value-added it brings,” he says.