Turkey may have difficulties entering the EU, but there is at least one European organisation that it has gained entry to: the European Fund  and Asset Management Association.

By European standards the Turkish asset management business may be immature, but the shifting economic climate there and support from government suggest that equity and fixed-income investment by domestic investors is set to substantially increase.

Bank deposit rates have historically offered higher returns than government bonds, while equities were never a significant part of portfolios. But with interest rates coming down and inflation falling to single digits after years of high growth, this is all changing.

And with this change there are 291.33bn Turkish lira (€132.64bn) in domestic bank deposits that may look for a new home with fund managers in the next few years. At least this is what industry members believe. If they are right, there is also more where that comes from.

The Turkish investment and pensions business held US$23.5bn (€17.78bn) of assets under management at 30 April, according to the Turkish Institutional Investment Management Association (TIIMA) (see box). This is only a small part of GDP, which stands at $750bn, but Gur Cagdas, chairman of TIIMA, says the capacity for growth is “very high” considering there is a total potential investment amount of $470bn.

As well as their lira deposits, Turkish savers also have $100bn in foreign exchange deposits and $85bn stashed in gold.

Ashmore Investment Management, a London-based emerging markets specialist, is applying to offer mutual funds in Turkey as part of a joint venture. The company would not reveal its partner, but the venture would mark an extension of its already existing Turkish fund management business.

Jerome Booth, head of research, says assets in the country are growing at a rate of about 5% a year.

But putting lower interest rates and inflation aside, there are still developments propelling the asset management industry. The government is building a financial centre in Istanbul and trying to form an infrastructure with incentives for the finance industry. Cagdas says there is a tax exemption for income on funds that hold at least 51% of equities for a year.

There is also a growing pension funds business, though it is still in the early stages. “The establishment of the pension fund sector in our country is a remarkably important era [for professional investment managers] and so far it has reached $4.5bn since October 2003,” says Cagdas.

Around 2m investors have been added to the system so far and individual investors in these funds will hold the major part of the equity market in future, he adds.

Additionally, even though Europe’s Ucits fund structures are not widely recognised in Turkey, Omer Yenidogan, CEO of Turkish firm TEB Asset Management,  says Turkey aims to fall in line with the Ucits directive by the end of 2009 or early 2010.

Cagdas adds that some funds compatible with Ucits III, as well as hedge funds, have already applied for licences this year and will “soon take their market place”.

Lack of issuers
But opportunities to invest client money in the domestic market come with their issues.

“There are also very few corporate bonds and they are not publicly available. They go to the banks, not mutual funds. But we will see more corporate bonds in the next wave and funding will be from domestic investors.”

On the other hand, there are more than 350 companies on the Turkish equities market. These include Anadolu Efes, which is the Middle East’s largest brewer, and Koc Holding, a Fortune Global 500 corporation and the largest conglomerate in Turkey, comprised of 98 consolidated companies.

According to Yenidogan, around 75% of equities are held by foreigners, but all local bank distributors promote equity funds. However, he says, open architecture in the Turkish bank distribution system is limited.

TEB Asset Management is an active manager operated by TEB Mali, a Turkish banking group in which BNP Paribas, the French bank and asset manager, has a 50% stake. The firm counts Citi among its clients and Yenidogan says banks are paying more and more attention to mutual funds.

TEB is Turkey’s oldest asset management firm, Yenidogan says. He adds that the firm’s market share in Turkey is 10.4% of the equity and fixed income market (9.1% equities and 10.8% fixed-income excluding money market funds).

Expansion abroad
Although growth in the local client base has some distance to go, certain Turkish asset managers like TEB are already looking to expand their Turkish fund offerings to foreign markets.

Cagdas, of TIIMA, says: “With growth in the market and diversification of investment instruments in Turkey, it is also expected that Turkish asset management companies will start to expand abroad. The recent position of the European fund market is considered as an opportunity for Turkish companies.”

Through BNP Paribas, TEB has already gathered clients in Western Europe as a sub-adviser to a BNP Paribas Turkish equity fund. But TEB’s ambitions also centre on other Eastern countries.

Yenidogan says: “Domestic managers are looking to offer their services internationally. We are very close to an area that I call the ‘emerging of the emerging’ economies. This includes Bulgaria, Georgia and the Ukraine.

“In the near future we will expand our knowledge and expertise towards the eastern Mediterranean. We can expand our presence there with cross-regional funds.”

According to figures from TIIMA, TEB is the eighth largest asset manager by assets under management, as at 31 March this year. t has $901m under management, while Is Asset Management, the largest manager, has over $5bn (see table). 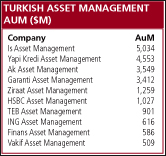 Local players have a strong hold in the market, particularly those attached to banks. Ashmore does not make the top ten list, but its expansion plans could change that – particularly as it could have just the right type of products that Turkish investors will want.

There is a sense that the products that will sell well in Turkey in the next few years will be emerging market funds. Ashmore is an emerging markets specialist, while TEB is preparing to offer a Bric fund in Turkey with BNP Paribas Investment Partners acting as the sub-adviser.

As a one-time emerging market itself, Turkish investors are not nervous about investing in similar countries.