The once dormant collateralised loan obligation market has sprung back into life. The CLO is one method of investing in corporate loans and the prospect of rising rates could create interest in others, finds Nick Fitzpatrick.

If you are like Stephane Blanchoz of BNP Paribas Asset Management and tasked with finding new ways to create revenue, the loans market looks like a promising place to search.

Blanchoz is chief investment officer for alternative fixed income and his mission is to build up the loans business to support the French asset manager’s ambition to increase its overall assets under management by €40 billion over the next two years.

He is investigating the loans market at a time when the market in collateralised loan obligations (CLOs) has shown signs of a comeback. Instruments like these, with complex underlying links between counterparties, came to encapsulate the mistrust that investors felt for each other at the onset of the financial crisis, and they subsequently went out of fashion.

It is perhaps no coincidence that CLOs are making a comeback at a time when the outlook for interest rate hikes is heightened owing to the US Federal Reserve’s tapering and improving economic growth.

Why? Because bonds with fixed coupons will suffer; senior loans to companies – which are accessible through CLOs or more vanilla loan funds – have floating rates, implying they have a hedge against rate risk.

There is also a significant demand driver for corporate loans from smaller and medium sized enterprises (SMEs), which continue to be starved of finance. One of the biggest criticisms of the various initiatives by central banks to inject money into economies has been the failure of funding to reach the real economy. Instead of lending to customers, commercial banks strengthened their own balance sheets.

So bad is the lending environment that governments have had to act. France rolled out its €1 billion Novo fund in July last year, providing loans of five to seven years to SMEs aiming for returns of 4% to 6%. Measures have also been taken in many countries, including Denmark, Holland, Italy and the UK.

The UK’s difficulties have been documented by borro – a platform that links individual money lenders with SMEs and, as such, forms part of a growth industry in alternative lending vehicles that disintermediate banks.

One in ten small businesses nearly closed because of difficulties in raising capital last year, borro found. One in six sought additional external sources of finance, such as increased overdrafts, but of those, 40% were not successful.

Since the 2012 launch of the France-domiciled BNP Paribas Global Senior Secured Corporate Loans fund, the fund has raised €625 million of assets under management.

The fund invests in leveraged loans sold by banks to syndicates. Though not an outright example of bank disintermediation, the fund highlights how financial institutions can become alternative sources of lending.

Blanchoz says the company launched a Luxembourg version of the fund this year. Domiciling it in Luxembourg should facilitate marketing to an international audience, though the fund is not a Ucits vehicle, as loans are not a permitted asset class.

Disintermediation of the banks is a strong driver where Blanchoz is concerned. “The next step to me is anything that involves disintermediation,” he says. 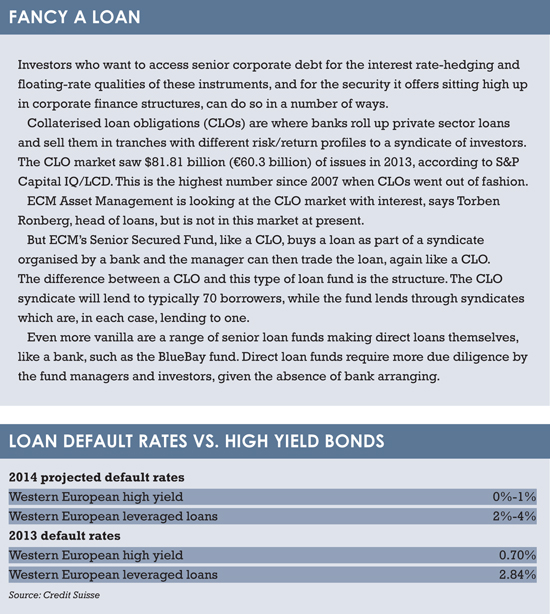 Blanchoz highlights the importance of due dilligence on loans through banks. “If a bank comes to us with a loan to sell on the secondary market, I am instantly suspicious because I suspect that this is a loan they do not want on their balance sheet.”

LOANS: LARGE AND SMALL
ECM Asset Management, a multi-credit investor, has a loans offering that consists in part of the ECM Senior Secured Fund.

“The size will normally be of €200 million and even larger,” says Torben Ronberg, ECM’s head of loans.

“We still work with the banks as intermediaries for these larger loans. The banks underwrite and take risk themselves. We will be one of 20 to 30 investors in the same loan and the negotiating with the borrower is done by the arranging bank.”

Another flavour of loan fund is a direct lending vehicle, which typically make smaller loans directly to the companies.

Making the case for loan funds, fund managers point out they are less risky than high yield corporate debt.

Anthony Fobel, head of private lending strategies at BlueBay, says: “High-yield lending tends to be to companies with higher leverage than we would lend to in this fund,” he says, adding that the typical company that the fund lends to has a leverage multiple of 3x to 5x earnings before interest, taxes, depreciation and amortisation are taken out, or Ebitda in the accounting lexicon.

Fobel says returns would be in the “high single digits” for the BlueBay fund.

Managers also point to lower default rates on loans compared to high yield debt. If companies do default on their senior loans, then there are higher recovery rates. A BlueBay white paper from November last year (Loans: a goodtime to protect against rising rates), uses Moody’s figures to calculate that loans have had a lower default rate over the long term: 2.47% compared to 3.63% for high yield.

Of all the signs that the world may be returning to normal after the financial crisis, one of the most potent is the re-emergence of the CLO market.

However, the fact that many companies struggle to find finance is a sign of the continued credit crunch.