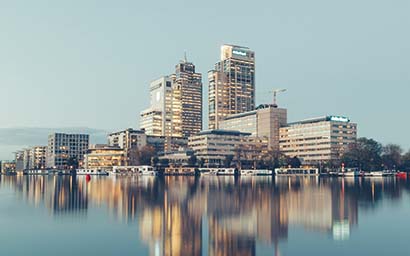 Funds Europe was media partner to an event in Amsterdam by investor services firm SGG Group to discuss the funds business environment in the Netherlands.

SGG, the fund administration business, hosted a further thought-leadership event in Amsterdam recently. The Netherlands and its environment for fund firms was the key focus. The event brought together a range of industry specialists to look at issues affecting the industry.

SGG Netherlands managing director Luc Hollman introduced the speakers and set the scene for the alternatives fund market, followed by a review of the Netherlands as a fund hub and how the market is changing.

Justin Partington, the firm’s group fund solutions leader, followed this with an introduction to SGG, outlining the businesses it had acquired in 2018, such as Augentius and Lawson Conner. Acquisitions helped the firm reach 2,450 industry professionals in more than 24 locations with over $400 billion (€351 billion) under administration.

The panellists were asked about the issues at the forefront of their minds and their biggest concerns. Regulation, compliance and, not surprisingly, Brexit registered strongly.

Looking forward, Rooseboom outlined his view on cryptocurrencies and how these were likely to grow. Schoonewille outlined how the regulator viewed crypto and how different jurisdictions approached the topic.

This led to a discussion about blockchain and its potential uses, which then moved on to the use of technology in the funds industry. Grueter approached this from a compliance point of view, while Krancenblum talked about it from an administration and asset servicing perspective. At the same time, van Deursen emphasised the importance of technology and the Netherlands as a centre of excellence.

Grueter noted that as the notion of personal liability was being extended in the funds industry, the importance of compliance could not be overstated and that technology will play an ever-more important role.

Next, the discussion turned to how the Netherlands is perceived. Is it an international tax hub, a tax haven or neither? Krancenblum, backed up by van Deursen, remarked that it clearly was not a tax haven, particularly from a funds perspective: it is exactly like all other major European domiciles.

The conversation extended into the legislative framework for the Netherlands, and Schoonewille outlined comparisons to other European domiciles.

Finally, Brexit. While many regretted - indeed, said they could not comprehend - the UK’s departure from the European Union, the panel discussed the effect and reality of the situation. With the outcome still a mystery, it was noted that businesses had started contingency planning and that this was gaining momentum. The Netherlands might possibly benefit in certain areas, along with Luxembourg, Paris and Dublin.

After this slightly downbeat question, the panel were asked to sum up their outlook for 2019. The good news is that in their own specialist fields, they were all optimistic for 2019 and saw many opportunities ahead. Change always brings out opportunities.

VIEWS FROM THE PANEL

“Compliance is a clear investment, not just a cost block - investors require it, stakeholders require it, it’s a clear differentiator, and a core part of delivering an institutional product to investors.

“Technology is a means to reduce risk and to stay compliant against the regulatory change and more diversified asset managers, which are exposed to more change than ever. You need an agile and responsive organisation.

“Regulators are driving personal responsibility and liability for compliance – now the risk is on you personally and no longer only a corporate problem.”

SERGE KRANCENBLUM, CEO, SGG GROUP
“Investment in technology will be key for fund administrators to stay ahead of the curve and adapt to the evolving needs of fund managers; those who fail to embrace this change face the risks of becoming redundant.

“We aim at building a very sustainable business model based on strong value-added services and not on tax optimisation.

BOUDEWIJN ROOSEBOOM, FOUNDER AND MANAGING PARTNER, CYBER CAPITAL
“Although the use case for Bitcoin (BTC) as a store of value remains to be seen, I believe that we are only just now starting to see what eventual benefits blockchain technology can provide from a business perspective.

“2019 will be the year of actual application development and implementation, increasing the user base and as such generating real value.

“Great progress has been made, and we expect professional financial crypto products like regulated custody and futures trading to be ready by early next year. This will most likely trigger a massive inflow of institutional investments.”

MARTIJN SCHOONEWILLE, LAWYER/PARTNER, BANKING & FINANCE, LOYENS & LOEFF
“Whether registered under the small managers regime or fully licensed, compliance has become increasingly important and it has the attention of the Dutch regulators. Obviously, it relates to AIFMD compliance, but also to AML, sanctions and Priips.

“The European proposals on cross-border distribution of investment funds are well intended, but as proposed the likely outcome is reduced legal certainty for fund managers.