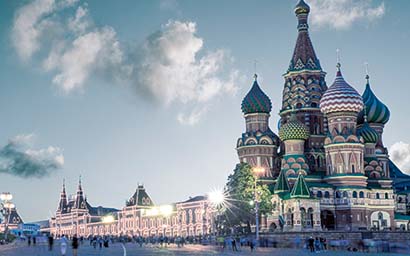 As the largest, most populous country in Europe by far, Russia is impossible to ignore, writes Fiona Rintoul. The worst of the sanctions may be behind us, but with net flows flat, what is there to attract new investors?

If you’re put off investing in Russia by the politicking that has surrounded the country over the past couple of years – worsening in November 2018 with the naval incident in Crimea – then you are not alone. Fund managers report a slump in interest in this great, sprawling market that promised so much a decade ago – though the bulk of that slump may be in the past.

“There has been a drop-off, but the largest semi-political redemptions happened two to three years ago,” says Jacob Grapengiesser, partner and head of Eastern Europe at East Capital.

Net flows are now more or less flat, with sizeable inflows and outflows cancelling each other out. And, of course, that slight feeling of a damp squib is not confined to Russia.

“The overall mood towards emerging markets (EM) is much more sombre than it was 10 years ago,” says Matthias Siller, head of the EMEA equities team at Baring and lead manager for the investment trust Baring Emerging Europe Plc.

In Grapengiesser’s view, investors who have stayed the course in Russia up until now are likely to stick with it in the future. The issue for Russia fund managers is really attracting new money.

“To attract new money, you need to see some big non-commodity consumer names performing,” he says.

On the downside, the likelihood of more sanctions on Russia has probably increased since the November 2018 incident in the Crimea. On the plus side, no one really expects massive sanctions or a catastrophic escalation of hostilities.

“I’d be very surprised if they let this escalate much further, because there is no upside,” says Per Hammarlund, chief emerging markets (EM) strategist at SEB, noting that: “You should always expect Russia to challenge Western interests.”

In truth, it’s impossible to know exactly what will happen politically. The Ukrainian presidential election in March 2019 is one hurdle to pass. After that, Russian-Ukrainian relations may normalise, suggests Grapengiesser, who provides a quantification of the impact of sanctions that puts them into perspective.

“My take is that we are done with the worst sanctions round and we need to live in that environment,” he says. “If there are no more sanctions, this means 50-100 basis points lower GDP growth and a larger discount on the market than would have otherwise been the case.”

GDP growth is currently projected to be 1.5% to 2% for the next few years. The Ministry of Economic Development believes growth can rise to 3%, but that will take a little time, Grapengiesser believes. Nonetheless, companies on the Russian market can still perform and produce profits, and there were still plenty of foreign investors at an investor conference in November.

“Russia is still a big and important market,” Grapengiesser says.

And that is perhaps the bottom line. Russia is by far the largest country in Europe, with the largest population, and so it is impossible to ignore. It also looks undervalued in a context where – behind the white noise of sanctions – many sensible reforms have been put in place.

Holding their noses
And if some Western investors are holding their noses because of political sensitivities, there are plenty of foreign investors from other regions eager to be involved in this unique and complex market. Perhaps most notable among them are Chinese investors. In China, says Siller, people wouldn’t understand that Western, perhaps particularly Anglocentric, compunction.

Symbolically, next year’s Eurasian Economic Forum is to take place in Vladivostok on Russia’s eastern extremity, close to the Chinese border. And earlier this year, Alibaba, the ecommerce giant that is China’s answer to Amazon, bought a stake in the Russian internet company, mail.ru, which controls Russian social networking sites such as VKontakte.

It’s companies such as this that could drive future growth in the Russian market. For example, Yandex, an integrated internet platform that offers everything from music to taxi rides to online shopping, has beaten off competition from international competitors such as Facebook, Google, Uber, Amazon and Spotify.

“If you look into the entire e-commerce, social networking and internet environment, you’ll find that Russia always stands out in the sense that there are local solutions,” says Siller.

Domestic names lead the market, and not because of regulatory reasons but because they have a better offer. In some cases, physical presence is also an issue. You cannot, for example, use Amazon in Russia because they don’t have warehouses there.

These local e-commerce players nicely summarise the twin attractions of Russian companies as an investment. First, as domestic players, they have access to a massive market that is otherwise difficult (impossible in some cases) and expensive to reach, as well as being difficult to understand.

“Fulfilment in Russia is extremely difficult in the cities, let alone in the countryside,” says Siller, who also notes that in business that is all about data, Russian internet companies know their customers better and take an integrated approach.

Secondly, they have access to a large pool of well-educated people. Thanks to the sheer size of the education system and the emphasis placed on natural sciences, there are, says Siller, the “armies of developers” necessary to go into battle with the FAANGS of this world and win.

“In my opinion, this is top-notch technology,” Siller says. “If you can compete on equal terms with the internet giants of this world, that’s not a bad sign.”

“Investors will go back and look at which companies are best in class, where the valuations are what the earnings growth is,” says Grapengiesser.

East Capital numbers show Sberbank, Russia’s largest bank, with earnings growth of 15%-20% and trading at 4.5 times earnings. For Yandex, earnings growth is predicted to be 64% next year.

“These are numbers that are just a bit too good to ignore,” says Grapengiesser. “The growth in Sberbank is not the highest, but the valuation is probably too low. Then for Yandex, you have this amazing growth.”

Rampant corruption
This growth takes place against a background of improving macroeconomic and market conditions. Difficulties remain, of course. Aside from sanctions, there is the issue of corruption.

At the same time, corporate governance has improved at many companies – including some state-owned companies. One measure of this is that dividend yields in the Russian market have substantially improved.

“Russian companies have become much better at allocating capital,” says Siller. “They are now much more professionally run.”

Furthermore, at the macroeconomic level, the government and the independent central bank are running a tight ship. “The central bank is one of the most orthodox and reliable in terms of its determination to fight inflation,” says Hammarlund.
Interest rates are high compared to, say, Western Europe, making the cost of debt high. This creates positive knock-on effects, such as an increasing need to use equity financing. That in turn promotes improvements in corporate governance, says

Siller, as improved corporate governance is a good way to increase a company’s value before going to market.

A so-called fiscal rule has also been introduced whereby government tax receipts from oil are kept at an oil price of $45 a barrel. All surplus revenues are squirrelled away at the central bank. This effectively freezes the budget in rouble terms and reduces currency volatility.

“The correlation between the rouble and the oil price is not as strong as it was,” says Hammarlund.

Away from the equity markets, such fiscal prudence makes Russia a good bet for bond investors. With the government committed to keeping its finances in good order, the Russian state is a very strong creditor that offers a high yield.

“The Russian government could pretty much pay off all its debt with its reserves,” says Hammarlund.

That’s one of many pluses that the Russian market has to offer. There are, of course, also minuses, and political risk is high up the list. But – as Siller notes – there aren’t too many countries in the world at the moment where there isn’t political risk.

In the end, Russia is Russia: huge, complex and endlessly fascinating. You either get it or you don’t.

“Russia is a very specific market,” says Grapengiesser. “It’s not all black or white. There are a lot of things in between and that is, in a way, the beauty of it.”